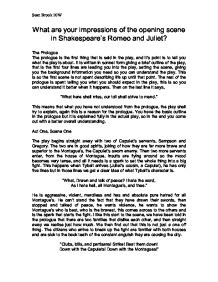 What are your impressions of the opening scene in Shakespeare's Romeo and Juliet?

What are your impressions of the opening scene in Shakespeare's Romeo and Juliet? The Prologue The prologue is the first thing that is said in the play, and it's point is to tell you what the play is about. It is written in sonnet form giving a brief outline of the play, that is the first four lines are leading you into the play, setting the scene, giving you the background information you need so you can understand the play. This is so the first scene is not spent describing life up until that point. The rest of the prologue is spent telling you what you should expect in the play, this is so you can understand it better when it happens. Then on the last line it says, "What here shall miss, our toil shall strive to mend." This means that what you have not understood from the prologue, the play shall try to explain, again this is a reason for the prologue. ...read more.

We then find out that this is not just a one off thing. The citizens who arrive to break up the fight are familiar with both houses and are sick to the back teeth of the constant anguish they are causing the city. "Clubs, bills, and partisans! Strike! Beat them down! Down with the Capulets! Down with the Montagues!" They are not in favour of either house, they hate them both and they are prepared to put up a fight against them. The mood then changes, the fight ceases, this is because of the entrance of the prince. The prince gives a speech showing his anger at the two families, and towards the end threatening them. "If ever you disturb our streets again, Your lives shall pay the forfeit of the peace." He is threatening them with their lives, but no doubt he has told them before, yet they take no notice. ...read more.

Montague says, "Black and Portentous, must this humour prove" this is black bile, which means that he thinks Romeo is Melancholy. When Romeo enters he is left talking with Benvolio, he says that he is miserable because of love, "Out - Of love? Out of her favour where I am in love." But is he actually in love, or is he, as his father said, just melancholy. His language is very elaborate, maybe they are artificial emotions he talks of, maybe he thinks he is in love, when really he is not, he is only a teenager, can he really have true love? I think that he is not in love, just infatuated, he wants to think that he is in love but really he isn't. Overall I think that this is a good opening to the play, lots of characters have been introduced and already we know the nature of some of them. It gets straight into the plot, without needing to go through back up information that leads you in to the play very well. Sean Brook 10W ...read more.