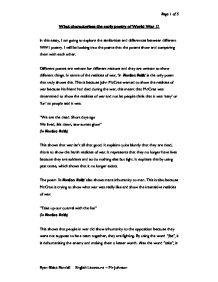 What characterises the early poetry of World War 1?

What characterises the early poetry of World War 1? In this essay, I am going to explore the similarities and differences between different WW1 poetry. I will be looking into the points that the poems show and comparing them with each other. Different poems are written for different reasons and they are written to show different things. In terms of the realities of war, 'In Flanders Fields' is the only poem that truly shows this. This is because John McCrae wanted to show the realities of war because his friend had died during the war, this meant that McCrae was determined to show the realities of war and not let people think that it was 'easy' or 'fun' as people said it was. "We are the dead. Short days ago We lived, felt dawn, saw sunset glow" (In Flanders Fields) This shows that war isn't all that good. It explains quite bluntly that they are dead, this is to show the harsh realities of war. It represents that they no longer have lives because they are soldiers and so do nothing else but fight. ...read more.

Nevertheless, there are some poems such as 'Into Battle' that only state the positive points about war and even the bad aspects are described as something positive and are seen as propaganda. Another example of 'toning death down' and making it seem not so bad is: "War's annals will fade into night Ere their story die." (At time of 'The Breaking of Nations') This describes death in a subtle way and it represents that it is the end; this is shown by saying that 'their story die' and that it has faded 'into night'. Some of the poems show strong patriotism that is often also used to encourage people to enlist and to make war sound positive. "Went thundering past beneath the oriflamme." (The Volunteer) This shows patriotism to England. The flag represents the country and that he is proud to fight. In a similar way, 'Into Battle' also shows patriotism: "The fighting man shall from the sun Take warmth and life from the glowing earth" (Into Battle) This also shows patriotism and works in a similar way to the quote from 'The Volunteer' and encourages people to enlist in the war, which is also linked to propaganda. ...read more.

For example, in 'Song of the soldier', the first and last stanza are exactly the same, and the first and last two lines are the same in every stanza. Overall, my favourite poem is 'In Flanders Fields', this is because it is not a propaganda poem. The problem I find with propaganda poems is that they are often extremely biased and so lie about the bad things to make them sound positive. In my opinion 'In Flanders Fields' shows the true realities of war and does not 'tart' it up to something it is not. I also like how it has a pleasant pace and rhymes well but then it suddenly drops the pace when the last line of the second and third stanza is read, I think this shows how everything can be going well and then something unexpected happens like the death of a friend which is upsetting and it can change your life so much. Word Count: 1140 ?? ?? ?? ?? Page 1 of 5 Ryan Blake Randall English Literature - Mr Johnson ...read more.