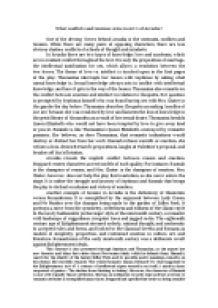 What conflicts and tensions arise in Act 1 of 'Arcadia'?

﻿What conflicts and tensions arise in Act 1 of Arcadia? One of the driving forces behind Arcadia is the contrasts, conflicts and tension. While there are many pairs of opposing characters, there are less obvious clashes; conflicts of schools of thought and mindsets. In Arcadia there are two types of knowledge: love and academia, which are in constant conflict throughout the text. It is only the proposition of marriage, the intellectual justification for s*x, which allows a resolution between the two forces. The theme of love vs. intellect is touched upon in the first pages of the play. Thomasina interrupts her lesson with Septimus by asking what carnal knowledge is. s****l knowledge always acts in conflict with intellectual knowledge, and here it gets in the way of the lesson. Thomasina also remarks on the conflict between emotion and intellect in relation to Cleopatra. Her question is prompted by Septimus himself who was found having s*x with Mrs. ...read more.

Another example of tension in Arcadia is the dichotomy of Classicism versus Romanticism. It is exemplified by the argument between Lady Croom and Mr Noakes over the changes being made to the garden of Sidley Park. It portrays a move from the symmetry, orderliness and tidiness of the Classic style to the newly fashionable ?picturesque? style of the nineteenth century, a romantic wild landscape of ruggedness, irregular trees and jagged rocks. The eighteenth century age of Enlightenment stressed orderly, rational thought, and conformity to accepted rules and forms, and looked to the Classical Greeks and Romans as models of simplicity, proportion, and restrained emotion in culture, art, and literature. Romanticism of the early nineteenth century was a deliberate revolt against Enlightenment ideals. This contrast is also presented through Septimus and Thomasina, as she argues her new theories and ideas that refute classic Newtonian ideals while he defends them. Hannah?s search for the identity of the hermit Sidley Park, and its possible poetic meanings, remarks on this theme. ...read more.

A great philosopher is an urgent need, there is no rush for Isaac Netwon?. However, the play also explores how the lines between science and literature can be blurred; ?Then maths left the real world behind, just like modern art, really. Nature was classical, maths was suddenly Picassos. But now nature is having the last laugh. The freaky stuff is turning out to be the mathematics of the natural world. Additionally, there is an abundance of clashes of character in Arcadia. The most obvious is Hannah and Bernard, but there is also: Mr Noakes and Lady Croom (in relation to the changing of the garden), Chater and Septimus (perhaps this is more a conflict of intellect, as Septimus constantly deceives Chater with his words) and Valentine and Bernard (a difference of mindsets regarding mathematics and literature). In conclusion, it is the conflicts and tensions set up in the first act that drive the play forward into the next. Stoppard is very effective in ensuring that the play does not simply become a platform for debate regarding the various dichotomies, but they rather add to the deeper meaningswhich Arcadia is steeped in. Taybah Siddiqi 12AM ...read more.