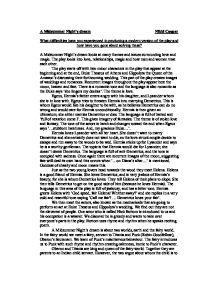 What difficulties have you experienced in producing a modern version of the play and how have you gone about solving these?

A Midsummer Night's dream Nikki Cooper What difficulties have you experienced in producing a modern version of the play and how have you gone about solving these? A Midsummer Night's dream looks at many themes and issues surrounding love and magic. The play looks into love, relationships, magic and how men and women treat each other. The play starts off with two minor characters in the play that appear at the beginning and at the end, Duke Theseus of Athens and Hippolyta the Queen of the Amazon's discussing their forthcoming wedding. This part of the play creates images of weddings and romances. Recurrent images throughout the play appear here the moon, heaven and fate. There is a romantic tone and the language is also romantic as the Duke says 'she lingers my desires'. The theme is love. Egeus, Hermia's father enters angry with his daughter, and Lysander whom she is in love with. Egeus tries to threaten Hermia into marrying Demetrius. This is whom Egeus would like his daughter to be with, as he believes Demetrius can do no wrong and would care for Hermia unconditionally. Hermia is then given an ultimatum; she either marries Demetrius or dies. The language is full of hatred and 'full of vexation come I'. This gives imagery of fantasies. The theme is of stolen love and fantasy. The tone of the actors is harsh and changes toward the end when Egeus says '...stubborn harshness. And, my gracious Duke...'. Hermia loves Lysander with all her heart. She doesn't want to marry Demetrius and she certainly does not want to die, so the love-struck couple decide to escape and run away to the woods to be wed. Hermia sticks up for Lysander and says he is a worthy gentleman. The topic is that Hermia would die for Lysander; she doesn't desire Demetrius. The language is full of anti-Demetrius, and the tone is occupied with sadness. ...read more.

On the other hand you have the relationship between father and daughter, Egeus and Hermia. Egeus wants Hermia to be with someone whom she does not love, and tries to threaten her. This illustrates that not only is Egeus being selfish, he is also being protective and wanting the best for his daughter. This establishes tension as the audience is left to decide whom they side with. Another example of how men and women treat each other is the association of Helena and Demetrius. Helena does all she can for Demetrius and is very affectionate towards him, however Demetrius dismisses her out of hand because he doesn't care for her. Still today we find families and partners arguing about love, you can even find arguing between men and women in the work place fighting for equal pay. This is one of the many reasons that A Midsummer Night's Dream is still important in today's society. This part of the play also symbolises arranged marriages in cultures and today's civilization. This is also shown through the battle of power between Oberon and Titania, and again today via religion. The play what's more presents to the audience the theme of magic, and the issue that magic, or even money cannot buy love. It displays that relationships are not an 'easy ride' and do need working at. 'The course of true love never did run smooth'. In the play the magic seems to do more harm than good, creating a moral to the story; magic can do no good, it is evil and can hurt people in many ways not realised. The idea of the play is revolved around the inspiration of the Summer Solstace. The Summer Solstace is the longest day of the year, and it is believed this is the day when amazing magical happenings occur. The background of the play and the framework is built around the Summer Solstace. ...read more.

If a modern re-work was to take place the two issues that should be emphasised which would has the most important relevance to today's society is Authority Vs. Rebellion and Love Vs. l**t. Authority is shown today in key members of society. It can be found in the work place, at home or at school. Rebellion is also found in these places mainly between parents and their children. Parents telling their children what to do and them doing the exact opposite. In a modern day version of A Midsummer night's dream we could have the play set in a school and show the full blown effect of rebellious students and their bad habits. Love and l**t are often confused still in today's civilization. I think this is a very important issue to be raised and I think it should be targeted at teenage girls, as I feel this would appeal most, and teach them the most. We could have this as a relationship perhaps between teacher and student confusing love with l**t and showing the true implications of something like that happening. I feel the school setting would wok well today as it targets some important areas which could be example through a play and hopefully preventing today's people making the same mistake in the future; e.g. dugs, affairs. I contemplate over whether magic would still work in the play today as the teenagers at present and older know that magic is not real and this is where the essential target audience would be, as they would appreciate the film more. Perhaps the magic could be replaced with a drug, again trying to get the message across that drugs are bad. Overall I think that Shakespeare has composed an amazing written play and I think it should be altered as little as possible, but so that it appeals to today's society. Setting in today's modern society, in a school, could possibly do this for example. ...read more.