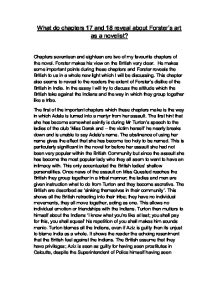 What do chapters 17 and 18 reveal about Forsters art as a novelist?

What do chapters 17 and 18 reveal about Forster's art as a novelist? Chapters seventeen and eighteen are two of my favourite chapters of the novel. Forster makes his view on the British very clear. He makes some important points during these chapters and Forster reveals the British to us in a whole new light which I will be discussing. This chapter also seems to reveal to the readers the extent of Forster's dislike of the British in India. In the essay I will try to discuss the attitude which the British take against the Indians and the way in which they group together like a tribe. The first of the important chapters which these chapters make is the way in which Adela is turned into a martyr from her assault. The first hint that she has become somewhat saintly is during Mr Turton's speech to the ladies of the club 'Miss Derek and - the victim herself' he nearly breaks down and is unable to say Adela's name. ...read more.

Turton blames all the Indians, even if Aziz is guilty then its unjust to blame India as a whole. It shows the reader the echoing resentment that the British feel against the Indians. The British assume that they have privileges; Aziz is seen as guilty for having seen prostitutes in Calcutta, despite the Superintendent of Police himself having seen prostitutes in Calcutta when he was the same age as Aziz. The British assume that because Aziz Is Indian and McBryde is British McBryde is allowed to on the basis of his nationality. As Chapter eighteen ends McBryde says 'lord help us, the lord help us all' this lets the reader know that McBryde assumes that God will be on the unjust side of the British. Throughout the two chapters Forster slowly reveals the British attitude, at first as a reader I thought that Turton was the only bigoted British. Forster describes Turton 'his face was white, fanatical and rather beautiful' this gives good imagery to help us imagine a Turton. ...read more.

On example of this is when Forster tells us about Turton 'He was still after the facts though the herd had decided on emotion' this shows that the club do not feel the need for Aziz to be proven guilty before they come to a decision as to whether he is guilty. Turton realises this but does not say it to the British because their belief and happiness in his 'guilt' fuels their excitement. There instinctual belief in his guiltiness shows there formality in a situation such as an assault. After an assault it is the expected reaction to gang up against the perpetrator just like the expected reaction of shock after a racist or sexist comment is made. Overall these two chapters let us know in more detail Forster's dislike of the British. We are allowed to know his feelings against racism and persecution. It also lets us know that Forster likes to subtly persuade his views and ideas onto the reader through his characters. I really admire and appreciate Forster's art as a novelist. ...read more.