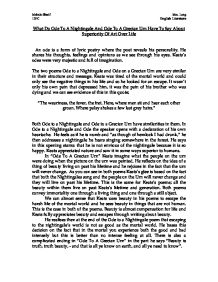 What Do Ode To A Nightingale And Ode To A Grecian Urn Have To Say About Superiority Of Art Over Life.

What Do Ode To A Nightingale And Ode To A Grecian Urn Have To Say About Superiority Of Art Over Life An ode is a form of lyric poetry where the poet reveals his personality. He shares his thoughts, feelings and opinions as we see through his eyes. Keats's odes were very majestic and full of imagination. The two poems Ode to a Nightingale and Ode on a Grecian Urn are very similar in their structure and message. Keats was tired of the mortal world and could only see the negative things in his life and so he looked for an escape. It wasn't only his own pain that depressed him, it was the pain of his brother who was dying and we can see evidence of this in this quote; "The weariness, the fever, the fret. Here, where men sit and hear each other groan. Where palsy shakes a few last grey hairs." Both Ode to a Nightingale and Ode to a Grecian Urn have similarities in them. In Ode to a Nightingale and Ode the speaker opens with a declaration of his own heartache. He feels as if he is numb and "as though of hemlock I had drunk," he then addresses a nightingale he hears singing somewhere in the forest. He says in this opening stanza that he is not envious of the nightingale because it is so happy. ...read more.

On the urn things stay the same, the people on the urn never get to fulfil their desires as much as they would wish to as they are still. In life we can even though there are consequences to every action humans take whether it is bad or good. Keats describes the urn as a "Cold Pastoral". This is maybe because the urn is lifeless, and in some ways humans prefer things that change and things that are warm in comparison to a cold lifeless never changing urn. In the lifetime of this urn it will remain the same, unlike life which is always changing which can be seem as more preferable than being an urn. Keats was attracted to the imaginary world of the urn as the places in the urn stayed the same forever. He wanted to be immortal like the Nightingale and the people on the Urn because he believed that as a human that as you get older life gets worse as a consequence of growing less attractive and dying and being frailer. In "Ode To A Nightingale" he says "Where beauty cannot keep her lustrous eyes," but this contrasts with the statement in "Ode To A Grecian Urn," which says "For ever wilt thou love and she be fair." As one poem is about something that is natural and one poem is about something that is a piece of art it is harder to say what each one says about art. ...read more.

But soon after, he rejects the idea of being "charioted by Bacchus and his pards" and instead chooses to embrace "the viewless wings of poesy," meaning he prefers to reach the birds state through his poetry as a means of escape rather than alcohol. Keats thinks that being as clever as we are is more of a curse as having big brains allows us to see others suffering which upsets us and a big brain also causes us to worry about the consequences of our actions causing huge stress. "Where but to think is to full of sorrow." Overall the message is quite clear in both poems. Keats in both poems is telling us about the misery of life, and he escapes this misery by writing poetry. He also tells us how he wants to be immortal in some ways like the Urn and the Nightingales song. But in some ways he is immortal as his poems are still widely read through out the world. In both poems Keats uses extensive amounts of imagination and imagery which helps the reader visualise and experience more the state Keats is in. he often uses nature and objects in his poems to create a sense of superiority for them. In both poems we get the feeling that the two tings the urn and the nightingale are in some ways superior to us but Keats also realises how being static isn't as good as it may seem. Mohsin Sharif Mrs. Long 12FC English Literature ...read more.