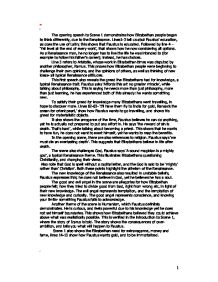 What do scenes 1 and 3 tell us about Elizabethan beliefs?

What do scenes 1 and 3 tell us about Elizabethan beliefs? By Hayley Sheath 12MF Scene 1. The opening speech to Scene 1 demonstrates how Elizabethan people began to think differently, due to the Renaissance. Lines1-3 tell us abut Faustus' education, as does the use of Latin; this shows that Faustus is educated. Followed by line 4 -'Yet level at the end of every work', that shows how he now considering all options. As a Renaissance man, he no longer has to live the life he was intended to (for example to follow his father's career); instead, he has choices. Line 5 refers to Aristotle, whose work in Elizabethan times was disputed by another philosopher, Ramus. This proves how Elizabethan people were beginning to challenge their own opinions, and the opinions of others, as well as thinking of new ideas- all typical Renaissance attitudes. This first speech also reveals the greed the Elizabethans had for knowledge, a typical Renaissance trait. ...read more.

The good and evil angel in the scene are allegories for how Elizabethan people felt; how they tried to divide good from bad, right from wrong etc, in light of their new knowledge. The evil angel represents temptation, and the temptation of new knowledge and curiosity. The good angel represents conscience, and knowing your limits- something Faustus fails to acknowledge. Another theme of the scene is Humanism, which Faustus definitely demonstrates. He is curious, and feels powerful due to his knowledge yet he does not set himself boundaries. This shows how Elizabethans believed they could achieve above what was realistically possible. This is verified in the introduction to Scene 1, where the story of Icarus is told. The story shows the consequences of over-ambition, and tells you what will happen to Faustus. Scene 1 also shows the Elizabethan need for extravagance, money and fame, lines 14-15 show how Faustus wants gold, and to be immortalized. ...read more.

He tells Faustus ' O, by inspiring pride and insolence, From which God threw him from the face of heaven'. This is exactly what is going to happen to Faustus, but he is too arrogant to listen to Mephastophilis. This creates dramatic irony for the audience, as they know what is going to happen to Faustus. It also shows how Elizabethans were so haughty that they refused to listen to others views, or even consider that they may be right. You can also see pride in Faustus saying' I see there's virtue in my heavenly words'. Faustus is so conceited with himself, as he thinks he has succeeded in conjuring the devil. This offers humour for the audience, because in fact, the devil came himself- it was nothing to do with Faustus. In scene 3, you can also see the doubts of Faustus. He says 'then fear not Faustus but be resolute'. This shows that although the Renaissance had brought superiority to Elizabethans, it also brought them doubt. The Renaissance proved that not all they believed was true-, which accounts for their doubts. 1 ...read more.