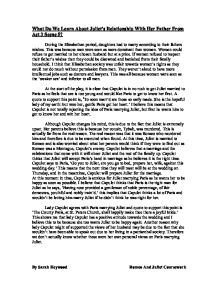 What Do We Learn About Juliet's Relationship With Her Father From Act 3 Scene 5?

What Do We Learn About Juliet's Relationship With Her Father From Act 3 Scene 5? During the Elizabethan period, daughters had to marry according to their fathers wishes. This was because men were seen as more dominant than women. Women could refuse to get married to her chosen husband but at a price. If women refused to respect their father's wishes then they could be disowned and banished from their family household. I think that Elizabethan society was unfair towards women's rights as they could not do much without permission from men. They weren't aloud to have more intellectual jobs such as doctors and lawyers. This was all because women were seen as the 'weaker sex' and inferior to all men. At the start of the play, it is clear that Capulet is in no rush to get Juliet married to Paris as he feels that see is too young and would like Paris to get to know her first. A quote to support this point is, 'To soon marr'd are those so early made. She is the hopeful lady of my earth: but woo her, gentle Paris get her heart.' I believe this means that Capulet is not totally rejecting the idea of Paris marrying Juliet, but first he wants him to get to know her and win her heart. ...read more.

Juliet acts grateful for her father finding her a husband but still refuses to marry him. Capulet expresses himself with anger and shouts to Juliet saying, 'How! Will she none? Doth she not give us thanks? Is she not proud? Doth she not count her bles'd, unworthy as she is, that we have wrought, so worthy a gentleman to be her bridegroom?' This means he thinks that Juliet is disrespecting him and his wishes for her to marry Paris. Another in which Capulet expresses his anger is in the way he calls Juliet cruel names. For example he says 'Out you green-sickness carrion! Out, you baggage! You tallow-face!' This shows that he can't believe that Juliet has refused his offer of an arranged marriage to Paris. He feels that Juliet is ungrateful and is disrespecting him by rejecting the marriage to Paris, by calling her names it is expressing his anger towards her. This will have a bad effect on their relationship because Juliet should respect and obey all Capulet's orders and she isn't. This results in Capulet being annoyed with Juliet and rupturing their relationship as father and daughter. Throughout the arguments, Juliet begs for forgiveness as she knows her father has the right to disown her and throw her out the family home and onto the streets. ...read more.

When Romeo eventually finds out, he is devastated and commits suicide by her side. Then Juliet awakes to find Romeo dead by her side, so she greaves and stabs herself with a dagger. Both were found together, dead. The strength of the father and daughter relationship is shown on great scale when both Capulet and Montague households agree to peace between them as respect for Romeo and Juliet's memories. Overall, I believe that the relationship between Capulet and Juliet varies throughout the play. At the start, the relation ship was strong. This was shown when Capulet told Paris he couldn't marry Juliet until they got to know each other and se begun to like him. This then changed when Juliet told her father that she can't marry Paris. Capulet got very angry and nearly disowned Juliet as his daughter. This is then quickly changed again when Juliet pretends that she will marry Paris, Capulet is then content Juliet. This continues right p tot the end when Capulet discovers that Juliet has committed suicide along side her husband, Romeo. His strong relationship with his daughter is shown at this time when his settles his differences with the Montague family in memory of Romeo and Juliet. By Sarah Heywood Romeo And Juliet Coursework ...read more.