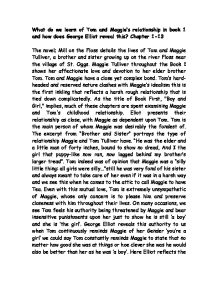 What do we learn of Tom and Maggie?

What do we learn of Tom and Maggie's relationship in book 1 and how does George Elliot reveal this? Chapter 1-13 The novel; Mill on the Floss details the lives of Tom and Maggie Tulliver, a brother and sister growing up on the river Floss near the village of St. Oggs. Maggie Tulliver throughout the Book 1 shows her affectionate love and devotion to her elder brother Tom. Tom and Maggie have a close yet complex bond. Tom's hard-headed and reserved nature clashes with Maggie's idealism this is the first inkling that reflects a harsh rough relationship that is tied down complicatedly. As the title of Book First, "Boy and Girl," implies, much of these chapters are spent examining Maggie and Tom's childhood relationship. Eliot presents their relationship as close, with Maggie as dependent upon Tom. Tom is the main person of whom Maggie was desirably the fondest of. The excerpt from "Brother and Sister" portrays the type of relationship Maggie and Tom Tulliver have. "He was the elder and a little man of forty inches, bound to show no dread, And I the girl that puppy-like now ran, now lagged behind my brother's larger tread". ...read more.

Undeniably, the portrayal of Maggie and Tom's childhood relationship in Book First raises an important theme of forgiveness and justice. Tom is characterized as a stubborn boy who always has a code of fairness in his dealings and judgments of others. We see this code of his has caused great pain to others around him for example Maggie's puzzlement over proper conduct in the matter of the pastry. Maggie operates in relation to feelings unlike Tom who always feels he is right in what he does. Maggie continuously craves forgiveness. We also spot that unlike Tom Maggie does not easily forgive herself "Maggie was always wishing she had done something different." George Elliot creates child characters and places language in their mouths more applicable for an adult. Eliot seeks to make Tom and Maggie seem realistic by focusing precisely on their immaturity. Plague her in these chapters, with a new element added-the presence of Lucy Deane, of whom Maggie is jealous. Lucy Deane is everything that Maggie is not-demure, pretty, blond, light-skinned, and doted on by Mrs. Tulliver. Maggie's malicious behaviour toward Lucy, especially given Lucy's good humour and love of Maggie, is another instance in which Eliot creates distance, rather than sympathy, between Maggie and the reader. ...read more.

Tulliver about the family bedsheets back in Chapter II, "An' if you was to die tomorrow, Mr. Tulliver, they're mangled beautiful, an' all ready, an' smell o' lavender as it 'ud be a pleasure to lay 'em out." In Chapters XII and XIII, Mrs. Glegg is described partially in terms of her frequent hypothetical considerations of the state of things after her own (or Mr. Glegg's) death. Death stands as an ideal state for Mrs. Glegg-a time during which true affection can be felt for her husband and when her standing as a respectable member of the community will be vindicated through the generous terms of her will. This reverential desire for the state of death dictates Mrs. Glegg's particular morality, a sense of duty in relation to legacy, instead of living relations. Thus she will not cut Tom and Maggie out of her will in Chapter XIII despite their father's poor behavior. The discussion between Mrs. Glegg and Mrs. Pullet in Chapter XIII about Maggie's vices serves to emphasize, at the end of Book First, the overwhelming negative pressure that Maggie has faced throughout the first book. Maggie's spontaneous, non-conforming, and imaginative sense of self must continuously run against outside censure of her appearance, behavior, and talents. Only Maggie's father is depicted as loving her unconditionally, but even his love excuses her personality, rather than supporting it. ...read more.