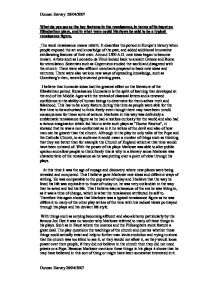 What do you see as the key features in the renaissance, in terms of its input on Elizabethan plays, and in what ways could Marlowe be said to be a typical renaissance figure.

What do you see as the key features in the renaissance, in terms of its input on Elizabethan plays, and in what ways could Marlowe be said to be a typical renaissance figure. The word renaissance means rebirth. It describes the period in Europe's history when people exposed the art and knowledge of the past, and added additional innovative exhilarating features of their own. Around 1500 A.D. new ideas began to become known. Artists such as Leonardo da Vinci looked back to ancient Greece and Rome for stimulation. Scientists such as Copernicus studied the world and disagreed with the church. There were also affluent merchants prepared to back new ideas and ventures. There were also various new ways of spreading knowledge, such as Gutenberg's then, recently invented printing press. I believe that humanist ideas had the greatest effect on the literature of the Elizabethan period. Renaissance Humanism is the spirit of learning that developed at the end of the Middle Ages with the revival of classical letters and a renewed confidence in the ability of human beings to determine for them-selves truth and falsehood. ...read more.

At this time it was the age of voyage and discovery where new places were being revealed and conquered. This I believe gave Marlowe new ideas and different ways of writing. He was comparable to the pop stars of today and I believe that the way he lived his life was equivalent to those of today i.e. he was very outlandish in the way that he acted and led his life. This I believe also is because of the era he was living in, as it was a time of change, which is what the renaissance attributed its self to. Therefore this again shows that Marlowe was a typical renaissance figure as he was different to many of the other play writes of the time with his radical views portrayed through his plays and his deviant life style. With things such as scrying becoming affluent and also alchemy particularly by the famous Jon Dee it was no wonder why Marlowe referred to many of these things in his plays. Such as in Faust where the cosmos and the Philosophers stone feature a great deal. ...read more.

And Faust is renowned for being the character, which personifies the renaissance period. He has shunned the church, as it is known Marlowe did later on in his life. And also Faust believes himself to be better than everyone as his intellect is far greater than most people. Marlowe also believed this, as he was arrogant because of his achievements, which he gained at university. In conclusion I believe that the renaissance had a substantial impact on English literature in the Elizabethan era. It changed the ways in which writers thought and the views that were put through in their plays. The studies of the cosmos and geography not only gave for more interesting plays but also there was scope for much more varying story lines which is shown not only in Marlowe's plays but in Shakespeare, in plays such as Macbeth. I also believe that Christopher Marlowe was the epitome of the renaissance play writes, with his radical new ideas and shocking life style. He perhaps should be the template for the typical Elizabethan Renaissance man. Duncan Harvey 28/04/2007 Duncan Harvey 28/04/2007 ...read more.