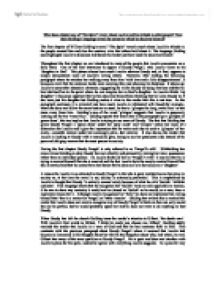 What does chapter one of &quot;The Spire&quot; reveal about Jocelin and his attitude to other people? How does Golding's language reveal the extent to which he deceives himself?

What does chapter one of "The Spire" reveal about Jocelin and his attitude to other people? How does Golding's language reveal the extent to which he deceives himself? The first chapter of William Golding's novel "The Spire" reveals much about Jocelin's attitude to the people around him and also the contrary view that others hold about it. The language Golding uses highlights Jocelin's delusions and shows the reader just how much he deceives himself. Throughout the first chapter we are introduced to many of the people that Jocelin encounters on a daily basis. One of the first characters to appear is Goody Pangall, who Jocelin views as his 'daughter in God'. This phrase shows how much Jocelin admires Goody and, at first, appears to simply demonstrate more of Jocelin's loving nature. However, after reading the following paragraph where he watches her walking away from him 'with love and a little disappointment', it becomes clear that the sentence holds more meaning than just showing his fondness. It shows up Jocelin's somewhat obsessive character, suggesting he views Goody as being flawless and that he has idealised her to the point where he can imagine her as God's daughter. As Jocelin thinks 'my daughter' it becomes apparent that he has deceived himself into thinking that he loves Goody as if she were just his daughter but Golding makes it clear to the reader that this is not true. ...read more.

Gilbert has many of the same qualities as Goody Pangall. He is quiet and does not interfere with Jocelin's plans for the spire, instead he agrees with everything Jocelin suggests. In a peculiar way Gilbert has every characteristic that people expected of a woman in those times and this is probably why Jocelin is so fond of him. As Gilbert does not, or more precisely cannot, object to any of Jocelin's remark or aspirations Jocelin is more comfortable around him. Unlike the chancellor, Pangall and others in the church, Gilbert is the one person who does not have any objections to the spire and Jocelin's delusions that God will perform a miracle in allowing it to be built. Therefore Jocelin need not be guarded around Gilbert for he knows that Gilbert will not confront him about the near non-existent foundations like the chancellor does 'I don't know, my Lord Dean'. That Jocelin likes to be around people who do not query him reveals that he likes to have control of the situation that he is in, and that he needs to be right. Golding has created Jocelin as a rather selfish character, he wants to build the spire and is determined to do so as, he believes, 'God will provide'. ...read more.

Golding is also suggesting to the reader tat in chasing his dream of the spire Jocelin has neglected not only his relationships with others but himself as well, allowing himself to become older and more dishevelled. Golding has taken the idea of Jocelin becoming lost in his vision by giving Jocelin the thought 'at the moment of vision, the eyes see nothing', a phrase completely suited to Jocelin and his situation. Overall, chapter one reveals to the reader that Jocelin has allowed himself become so absorbed into his vision of the spire that he has begun to ignore the people around him and to avoid them if they disagree with him or criticise his dream. It gives a great insight into Jocelin's thoughts and other's perceptions, showing the reader that most people in the church have started to see Jocelin as a person to ridicule as he is so self-involved that he will not notice. Golding's language helps to expose Jocelin's self-important views making them stand out and his continual use of the words 'joy' and 'love' in Jocelin's thoughts emphasise the fact that he believes he is blessed with the task to build the spire whereas the reader can see that it is more of a curse as it is beginning, even in the first chapter, to damage not only his relationships but his wellbeing too. ?? ?? ?? ?? ...read more.