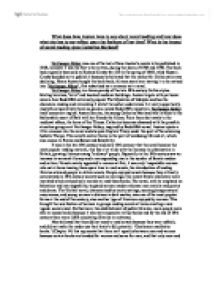 What does Jane Austen have to say about novel reading and how does what she has to say reflect upon the fashions of her time? What is the impact of novel reading upon Catherine Morland?

What does Jane Austen have to say about novel reading and how does what she has to say reflect upon the fashions of her time? What is the impact of novel reading upon Catherine Morland? Northanger Abbey was one of the last of Jane Austen's novels to be published in 1818, however it was the first to be written, during the years of 1798 and 1799. The book had originally been sold to Richard Crosby for �10 in the spring of 1803, titled 'Susan', Crosby decided not to publish it because he believed that the market for Gothic satire was declining. Henry Austen bought the book back, thirteen years later leaving it to be revised into 'Northanger Abbey', first advertised as a romance not a novel. Northanger Abbey is a fierce parody of the late 18th century Gothic styles: fainting heroines, 'terror' and haunted medieval buildings. Austen targets with particular venom Ann Radcliffe's extremely popular The Mysteries of Udolpho and has the characters reading and mimicking it whilst the author undermines it at every opportunity. Austen's comparatively book as good as ruined Radcliffe's reputation. Northanger Abbey itself concerns a typical Austen heroine, the young Catherine Morland who is taken to the fashionable resort of Bath with her friends the Allens. From there she travels to the medieval abbey, the home of the Tilneys. ...read more.

However, after this statement made by Henry Tilney he mentions that gentlemen are more superior to women by bragging that he read it within two days. However, not all of what he says is meant to be taken literally. Northanger Abbey is an imitation of the Gothic novel, such as Radcliffe's The Mysteries of Udolpho, which was particularly popular at the time Austen was writing this novel. The novel by Radcliffe is often mentioned in the novel as a book, which Catherine Morland is reading throughout the book. By being introduced to novels by Isabella she is able to socialise with Isabella because they have a common ground between them and can be at the centre of their conversation. Catherine Morland became so involved the novel that she was reading, she believes that it is real and becomes mixed up with fiction and reality. When talking about the Abbey, Catherine instantly believes that the Abbey is going to have things that may scare her 'just like one reads about' (Chapter 20). Catherine means the gothic novels that she has been reading, where in an abbey people are normally locked up in a room or a death has occurred. During the 18th century a person would not talk about such a thing so lightly because these kind of things would never occur, or not known to the average person. ...read more.

(Chapter 14) In this example, Catherine is reminded of the south of France when looking at Beechen Cliff, which she has never been to. This rather strange because it would be very hard to know what the south of France is like when you have not seen it yourself, unless you have read or heard very vivid description of it. Catherine has been so engaged by Udolpho that she can recall parts of the book immediately and use it as a reference to the present, showing Catherine's obsession to the novel. Northanger Abbey talks about how the reader is affected by a novel, that reading a novel can take you higher into society, because it meant that you were educated and to be educated you had to be fairly rich. Also Austen demonstrates that reading a novel such a gothic tale, the reader can be so enticed by the book that they are contaminated by these popular novels, which do not reflect human nature as it really is, that they behave as if they are the hero/heroine or any other major character. An example of this is when I was younger I used to watch every episode of a television serial about an ancient Indian myth, I believed that I was one of those characters and it was my duty to carry out the actions that they did, which made me re-enact their character, creating my own version of the myth. ...read more.