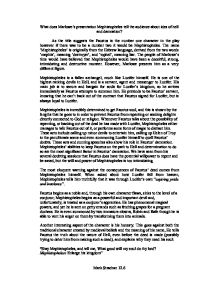 What does Marlowe's presentation Mephistopheles tell the audience about ides of h**l and damnation?

What does Marlowe's presentation Mephistopheles tell the audience about ides of h**l and damnation? As the title suggests the Faustus is the number one character in the play however if there was to be a number two it would be Mephistopheles. The name 'Mephistopheles' is originally from the Hebrew language, derived from the two words 'mephiz', meaning 'destroyer', and 'tophel', meaning liar. The people of Marlowe's time would have believed that Mephistopheles would have been a deceitful, strong, intimidating and destructive monster. However, Marlowe presents him as a very different figure. Mephistopheles is a fallen archangel, much like Lucifer himself. He is one of the highest-ranking devils in h**l, and is a servant, agent and messenger to Lucifer. His main job is to secure and bargain for souls for Lucifer's kingdom, so he arrives immediately as Faustus attempts to summon him. ...read more.

We have seen from his several doubting sessions that Faustus does have the potential willpower to repent and be saved, but the will and power of Mephistopheles is too intimidating. The most eloquent warning against the consequences of Faustus' deed comes from Mephistopheles himself. When asked about how Lucifer fell from heaven, Mephistopheles tells him truthfully that it was through Lucifer's own "aspiring pride and insolence". Faustus begins as a noble and, through his own character flaws, sinks to the level of a conjuror; Mephistopheles begins as a powerful and important devil and, unfortunately, is treated as a conjuror's apprentice. He has phenomenal magical powers, and yet he is sent on petty errands such as fetching grapes for a pregnant duchess. He is even summoned by two immature clowns, Robin and Rafe though he is able to vent his anger on them by transforming them into animals. ...read more.

Firstly, as Faustus despairs and calls out for a weapon with which he can kill himself, Mephistopheles automatically presents him with a dagger. Secondly, Mephistopheles intimidates and terrifies Faustus, accusing him with treachery and attempting to break the deed. Thirdly, he assures Faustus that it is too late to repent, fuelling his despair. Also, it is in this scene that we see a whole new side of Mephistopheles and one that is more in his traditional nature and stays true to his name. With his hostile acts towards the old man and his patience running out with Faustus, we see 'Mephistopheles the Destroyer', as he ensures Faustus' damnation by providing more chances to sin, such as suicide (the dagger that he presents to Faustus) and a devil conjured up to imitate Helen of Troy. In conclusion, Mephistopheles is perhaps the most complicated character in the play. Marlowe's character goes against the traditional beliefs of a medieval audience, but is a far more compelling figure Mark Strachan 12.6 ...read more.