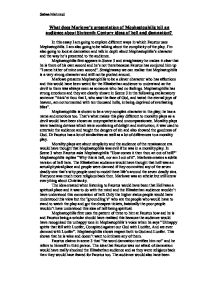 What does Marlowe's presentation of Mephastophilis tell an audience about Sixteenth Century ideas of h**l and damnation?

What does Marlowe's presentation of Mephastophilis tell an audience about Sixteenth Century ideas of h**l and damnation? In this essay I am going to explore different ways in which Faustus uses Mephastophilis. I am also going to be talking about the complicity of the play. I'm also going to look at damnation and talk in depth about Mephastophilis's character and the way he's presented to the audience. Mephastophilis first appears in Scene 3 and straightaway he makes it clear that he is there of his own accord and he's not there because Faustus has conjured him up "I came hither of mine own accord". Straightaway we can realise that Mephastophilis is a very strong character and will not be pushed around. Marlowe presents Mephastophilis to be a clever character who has affections and this would have been weird for the Elizabethan audience to understand as the devil to them was always seen as someone who had no feelings. ...read more.

The idea created when listening to Faustus would have been that h**l was a spiritual place and it was to do with the mind and the Elizabethan audience wouldn't have understood this connotation of h**l. Only the higher status people would have understood this view but the "groundling's" who are the people who would have to stand to watch the play and got the cheapest tickets, baisically the poor people wouldn't have understood this idea of h**l being spiritual. Mephastophilis first uses the pattern of three to hint at Faustus how sad he is and Faustus being a scholar should have realised this because the audience would have recognised the unhappy tone in Mephastophilis's voice when he says "Unhappy spirits that fell with Lucifer, Conspired against our God with Lucifer, And are ever damned with Lucifer". Mephastophilis shows respect both to God and Lucifer. This shows that he is wise and doesn't want to intimate any of them. ...read more.

Because Faustus wants to achieve the impossible it could be said that he wants to move up in the hierarchy and he wants to be equal to God or even above God which the audience in the Elizabethan era would have thought was wrong both ethically and morally. In the Great Chain of Being God comes first, then the angels, then mankind, then animals, plants and finally at the bottom come minerals. In Scene five when Faustus asks where h**l is Mephastophilis replies that it is "under the heavens" and this idea supports what the Elizabethan audience would have thought as this indicates that Heaven is up and h**l is down below. At the end of the play you can tell that Mephastophilis regrets that the time has gone past so fast as he's enjoyed his time on Earth and he doesn't want to go back into h**l. It could also be said that Mephastophilis was warning Faustus at the beginning because he wanted to show God that he was good so he could have another chance to go to heaven again and to prove himself to God. Sabaa Mahmud ...read more.