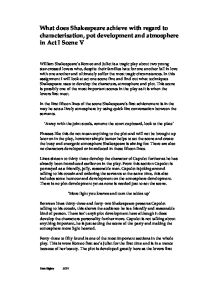 William Shakespeare’s Romeo and Juliet is a tragic play about two young star-crossed lovers who, despite their families hate for one another fall in love with one another and ultimately suffer the most tragic circumstances. In this assignment I will look at act one scene five and find out what techniques Shakespeare uses to develop the characters, atmosphere and plot. This scene is possibly one of the most important scenes in the play as it is when the lovers first meet.

In the first fifteen lines of the scene Shakespeare’s first achievement is in the way he sets a lively atmosphere by using quick fire conversation between the servants.

‘Away with the joint stools, remove the court cupboard, look to the plate’

Phrases like this do not mean anything to the plot and will not be brought up later on in the play, however simple banter helps to set the scene and create the busy and energetic atmosphere Shakespeare is aiming for. There are also no characters developed or introduced in these fifteen lines.

Lines sixteen to thirty three develop the character of Capulet further as he has already been introduced earlier on in the play. From this section Capulet is portrayed as a friendly, jolly, reasonable man. Capulet is joking around talking to his cousin and ordering the servants at the same time, this also includes some humour and development on the atmosphere development. There is no plot development yet as none is needed just to set the scene.

‘More light you knaves and turn the tables up’

Between lines thirty-three and forty-two Shakespeare presents Capulet talking to his cousin, this shows the audience he is a friendly and reasonable kind of person. There isn’t any6 plot development here although it does develop the characters personality further more. Capulet is not talking about anything important, he is just setting the scene of the party and making the atmosphere more light hearted.

Forty-three to fifty found is one of the most important sections in the whole play. This is were Romeo first see’s Juliet for the first time and is in a trance because of her beauty. The plot is developed greatly here as the lovers first meet. The imagery that Shakespeare uses shows us Romeo is a romantic type. Although it also shows him to be somewhat fickle.

‘Did my heart love till now? For swear it, sight, for I ne’er saw true beauty till this night’

However, only half an hour before hand he was in a depression over Roseline who he had also claims to be the most beautiful thing he had ever seen. Despite his fickleness Romeo is also proved to be a romantic.

‘O she doth teach the torches to burn bright! It seems she hangs upon the cheek of night, As a rich jewel in an ethiop’s ear’

This is said in rhyme, which proves to use Romeo is a main character with a good education. In this section the first atmosphere change of scene occurs. This is a soliloquy, as Romeo is not directing his speech to any one but himself, because of this the atmosphere changes from a happy, light hearted party to Romeo in his bubble of infatuation, because of the soliloquy. The mood has calmed down and it feels as if Romeo and Juliet are the only two people in the room.

Lines fifty-five to sixty quickly interrupt the interlude with a juxtapose. Romeos speech is interrupted by the fiery, aggressive character of Tibalt.

‘Fetch me my rapier, boy. What dares the slave’

We already know from previous scenes of the play that Tibalt is a violent character. Here the character is developed further and is made to be a disliked character that we are meant to think of as a hot-headed villain.

In lines sixty-one to seventy-five Capulet is attempting to defuse the situation as he has thought ahead and seen that the party would be ruined if Tibalt started a fight against Romeo.

Capulet tries to calm Tibalt down who is ready for a fight and wants to start another brawl in the Capulet’s household party. Capulet’s character has been carried on as a reasonable man as he was portrayed before hand in lines thirty-three to forty-two. The characters are developed further as the reasonable character of Capulet and the aggressive persona of Tibalt. Capulet also develops Romeo’s character for him by saying he is a reasonable respected man in Verona.

‘A bears him like a portly gentleman: and to say truth, Verona brags of him to be a virtuous and well-governed youth’

You can believe this as the Capulet’s are at war with Romeo’s family and they would pick up any reason to fault the opposition. However, Capulet does not which also makes him look like a reasonable man. The plot is not developed as Capulet stops that and there are no more mood changes in the atmosphere as Tibalt is still just as angry and aggressive as he was in the previous five lines.

In lines seventy-six to eighty-nine the atmosphere is intensified. Tibalt has already created a negative atmosphere by his out burst. Tibalt is saying he will no calm down and is refusing to do as he is told.

‘It fits when such a villain is a guest, I’ll not endure him’

Capulet then begins to argue back telling Tibalt he will not ruin his party or he will take away some his money. Capulet is also focusing on his party at the same time, telling his dancers to have a good time, in-between arguing with Tibalt. The character is Tibalt is also developing more as some one that does not respect his elders and will go against his uncles wishes if needs be.

Lines ninety to ninety-four Tibalt begins to talk to himself about how he will seek revenge at some other time. He has finally calmed down and decided to leave Romeo alone at the party and let everything seem sweet, when really it won’t be foreshadowed. Tibalt’s revenge will be taken out at a later date when Lord Capulet cannot stop him.

In lines ninety-five to one hundred and eleven another juxtapose occurs. There is a romantic atmosphere as the lovers speak for the first time. Romeo continues to flatter Juliet as he compares her to a statue or a holy shrine. Romeo’s character is developed further to be even more romantic. On the other hand Juliet comes across more shy and she is playing hard to get more than Romeo who is begging for her attention. The sonnet between Romeo and Juliet emphasises the importance of this scene and these few lines. The way Shakespeare has written this Sonnet makes it so that the atmosphere between them is intense and they are the only people in the room.

In line’s one hundred and twelve to one hundred and twenty-eight Juliet is taken away from Romeo by the nurse who takes her away to speak to her mother. The plot is moved along, foreshadowing upcoming events. A problem arises when Romeo realises she is a Capulet but it is too late as he is already in love.

‘Is she a Capulet? O dear account! My life is my foe’s debt’

There is also a change in mood as Romeo’s heart drops when he finds out the woman he has fallen in love with so quickly is some one he is meant to hate. The problem is set up here for later on in the play.

The final section, lines one hundred and twenty-nine to one hundred and forty-five see’s us to the end of this act leaving us on a cliff-hanger making us want to read on to find out what happens to the two lovers and what other obstacles they will have to over come. In line one hundred and thirty seven the nurse breaks the news to Juliet that Romeo is infact a Montague. Juliet’s excitement turns to sorrow as she is confused and upset by this whole situation.

‘My only love sprung from my only hate’

As Romeo and Juliet continue to grieve alone the nurse is busy trying to move Juliet along fro the party into her room as the party is now over.

In act one, scene five Shakespeare achieves a lot by the uses of language, tone, atmosphere and characterisation. Shakespeare makes significant use of these by leaving us with a cliff hanger making you want to read on to the next scene. Shakespeare also works well leaving us with many juxtaposes and one act. This is a difficult technique to use. However, Shakespeare uses this well to keep the reader interested.