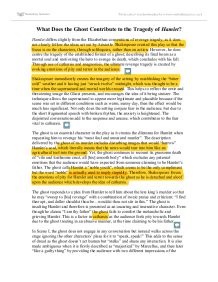 What Does the Ghost Contribute to the Tragedy of Hamlet?

What Does the Ghost Contribute to the Tragedy of Hamlet? Hamlet differs slightly from the Elizabethan conventions of revenge tragedy, as it does not closely follow the ideas set out by Aristotle. Shakespeare created this play so that the focus is on the characters, through soliloquies, rather than on action. However, he does centre the tragedy of the established format of a ghost; describing its final hours as a mortal soul and motivating the hero to avenge its death, which concludes with his fall. Through use of catharsis and anagnorisis, the ultimate revenge tragedy is created by evoking emotions of pity and terror in the audience. Shakespeare immediately creates the imagery of the setting by establishing the "bitter cold" weather and it having just "struck twelve" midnight, which was thought to be a time when the supernatural and mortal worlds crossed. This helps to reflect the eerie and threatening image the Ghost presents, and encourages the idea of it being sinister. The technique allows the supernatural to appear more legitimate and plausible because if the scene was set in different conditions such as warm, sunny day, then the effect would be much less significant. Not only does the setting conjure fear in the audience, but due to the short fragmented speech with broken rhythm, the anxiety is heightened. ...read more.

This leaves the audience confused as to whether it is good, or evil. In Scene iv, Marcellus describes the ghost as having a "courteous action", suggesting the ghost has good manners and is chivalrous. This strongly contrasts with the idea of the ghost's appearance being said to signify something "rotten in the state of Denmark." When Hamlet questions: "Be thou a spirit of health, or goblin damned?" Shakespeare polarizes the ghost, and it is unknown at this point in the play which category of good or evil the ghost falls into. Due to this unknown and the suspense created by the threefold antithesis, "bring thee airs from heaven or blasts from h**l, be thy intents wicked or charitable," used in Hamlet's speech, the ambivalence the audience feels for the ghost is heightened. Shakespeare thus makes the audience experience terror, contributing to catharsis. Marcellus asks if he should "strike it with [his] partisan", and the reason for his wanting to hurt or injure the ghost is because the characters are beginning to think the ghost is evil. This is also shown when they use the word "it", even though the ghost resembles the late king. The reason for this is because they believe the king's spirit is possessed by a demon. In the Elizabethan period the majority of people were Protestants and therefore did not believe in the Catholics' Purgatory. ...read more.

Beside the ghost, Hamlet looks significantly smaller and defenseless. This creates fear of the ghost and sympathy for Hamlet and therefore it ensures the audience undergoes catharsis. In Act Three Scene Four, by use of pathos the ghost gives the effect on the audience of pity and not terror, unlike the previous scenes where the ghost was seen wearing a suit of armor. Shakespeare presents the ghost dressed in its "habit", ordinary clothing or nightgown, which creates the impression of vulnerability. The audience also sympathizes with the ghost when it shows affection towards the Queen who it believes is suffering from her "conceit". This forces the audience into questioning the integrity of the ghost. However, in the BBC production, the ghost remains in his armor, which emphasizes the idea of terror instead2. Kyd had designed the Elizabethan formula for revenge tragedy with The Spanish Tragedy, while Shakespeare furthered the basic idea in Hamlet by adding suspense, characterization and ideological symbolism in order to produce a catastrophic and highly tragic play. He also demonstrates a building of catharsis throughout the play until it finishes with an emotional purge. In conclusion, the play successfully includes the majority of Aristotle's ideas as well as involving the moral significance of revenge. It is these factors that are contribute due to the ghost and because of its presence the play is classified as a remarkable tragedy. ...read more.

The writer shows a good knowledge of both text and context, but needs to structure the ideas to optimise their impact and importance. Repetition should be avoided and terminology not used for its own sake. ***