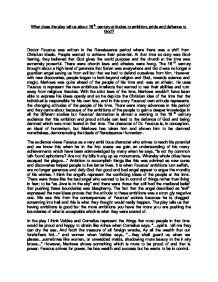 What does the play tell us about 16th century attitudes to ambition, pride and defiance to God?

What does the play tell us about 16th century attitudes to ambition, pride and defiance to God? Doctor Faustus was written in the Renaissance period where there was a shift from Christian ideals. People wanted to achieve their potential. At that time society was God-fearing, they believed that God gives the world purpose and the church at the time was extremely powerful. There were church laws and atheists were hung. The 16th century brought about a high level of paranoia that Satan was everywhere and God was no longer a guardian angel saving us from evil but that we had to defend ourselves from him. However with new discoveries, people began to look beyond religion and God, towards science and magic. Marlowe was quite ahead of the people of his time and was an atheist. He uses Faustus to represent the new ambitious intellects that wanted to test their abilities and turn away from religious theories. With the strict laws of the time, Marlowe wouldn't have been able to express his ideas openly and so he depicts the Christian idea of the time that the individual is responsible for his own fate, and in this story Faustus' own attitude represents the changing attitudes of the people of his time. ...read more.

It is when Faustus' ambitions turn selfish, are no longer generous and defy God that good and bad angel appear to argue the morality of his wishes. I think the angel's represent the conflicting ideas of the people at the time. There were those like the bad angel who wanted to be in control of things rather than living in fear; to be "as Jove is in the sky" and there were those that still had the medieval belief that pushing these boundaries was blasphemy. The fact that the angel described as "evil" expressed the new ideas proves that the attitude to these ambitions was a strongly negative one. We see this from the consequences of Faustus' actions because he is dragged screaming into h**l and this is what they thought would really happen. The play tells us that having ambitions is good but the more ambitions you have the more you are pushing the boundaries of what is acceptable which is what they were scared of. In the play I think Valdes and Cornelius represent the things that most people in that time would be proud and happy to obtain like riches when ...read more.

argued that the earth goes around the sun and so the belief that heaven was beyond the stars, angels were in the sky, h**l was beneath us, was shattered and people did start to question God. It would have been likely that many intellectuals in Marlowe's time would have thought about magic and going against God as magic was a skill widely believed in. However the fact that Faustus paid such a nasty price for his defiance shows that it wasn't accepted when the play was written. By using the character of Faustus who is quite ahead of the people of his time we are able to see Marlowe's beliefs and ideas, which he probably shared with many intellects like himself in this period of discovery and growing ambitions to "better yourself". Although Marlowe had these views, he wouldn't have been able to share them so Dr Faustus made people of that time aware of these revolutionary concepts but had to turn it into a morality play which shows that the 16th century attitude to pride, ambition and defiance of God were opposing and conservative so they could not be discussed or shared publicly. ...read more.