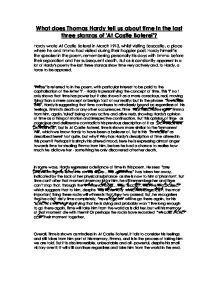 What does Thomas Hardy tell us about time in the last three stanzas of 'At Castle Boterel'?

What does Thomas Hardy tell us about time in the last three stanzas of 'At Castle Boterel'? Hardy wrote At Castle Boterel in March 1913, whilst visiting Boscastle, a place where he and Emma had visited during their happier past. Hardy himself is the speaker in the poem, remembering personally his days with Emma before their separation and her subsequent death. But as is constantly apparent in a lot of Hardy's poetry the last three stanzas show time very actively and, to Hardy, a force to be apposed. "Time" is referred to in the poem, with particular interest to be paid to the capitalisation of the letter 'T' - Hardy is personifying the concept of time. ...read more.

But this opinion of time as conscious and deliberate contradicts his previous description of it as "part steals lets part abide", but in At Castle Boterel, time is shown more similar to the 'Immanent Will', which we know Hardy to have been a believer of. But is this "mindless" as described here? Not quite, but why? Why has Hardy's description of time altered in this poem? Perhaps it is simply his altered mood, here he is expressing almost anger towards time for stealing Emma from him, before he had a chance to realise how much he did love her - something he only discovered after her death. ...read more.

But, he recognises that he can't defy time completely, "never again" will he go there again, for his "sand is sinking" signifying that he is dying and probably won't live long enough to go there again. Time will take him from the world as is did her, but will his memory of that moment die with them? Or perhaps the rocks have recorded "in colour and cast" their moment together. Overall, Time is shown as mindless in At Castle Boterel, it fails to consider his feelings and still takes from him part of his memory, Emma, and is in the process of taking him we are told. But it is also irreversible, unbeatable and all-powerful, despite his small victory over it; it will still continue regardless and take him from the world in the end. ...read more.