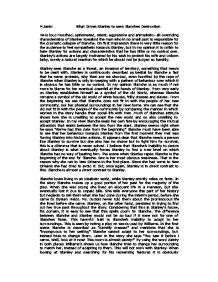 M.Ianiri What Drives Stanley to seek Blanches Destruction He is loud mouthed, opinionated, s****t, aggressive and animalistic- all overriding characteristics of Stanley Kowalski the man who in no small part is responsible for the dramatic collapse of Blanche. On first impression there is very little reason for the audience to feel sympathetic towards Stanley, but in my opinion it is unfair to hate Stanley for actions and characteristics that he has little or no control over. Stanley's actions are largely motivated by his wish to protect his wife and unborn baby, surely a natural reaction for which he should not be judged so harshly. Stanley sees Blanche as a threat, an invasion of territory, something that needs to be dealt with. Stanley is continuously described as b*****l by Blanche a fact that he never protests, why then are we shocked, even horrified by the r**e of Blanche when Stanley is only in-keeping with a pattern of behaviour over which it is obvious he has little or no control. In my opinion Blanche is as much if not more to blame for her eventual downfall at the hands of Stanley. From very early on Stanley establishes himself as a symbol of the old World, whereas Blanche remains a symbol of the old world of white houses, frilly dresses and slaves. ...read more.

One of the biggest factors in their relationship, the thing that attracts Stella most to Stanley, is the very thing that Blanche and the majority of the Audience hate so much, his animalistic nature. Stella makes her feelings for her husband very clear showing her desire saying "when he's away for a week I nearly go wild" Lines like this illustrate the principal emotion that will shape Stella's later decision as to where her loyalties lie. Stella, the link between the two, must listen to the facts given to her by Stanley, and the virtues of idealism given to her by Blanche and decide who she wants to side with, predictably she sides with Stanley, "I couldn't believe her story and go on living with Stanley". It seems difficult to separate love and l**t in Stanley's relationship with Stella; however the animal passion that obviously attracted Stella disgusts her later in the play. The fact Stella and Stanley are mutually dependent on each other is very evident throughout the play. What is also evident is that the two have achieved a balance that is disrupted by the arrival of Blanche. In the third scene Stella is beaten by Stanley an event that obviously traumatises Blanche but Stella, who ends up spending the night with her husband, sees no problem with it, Blanche asks her "How could you come back in this place last night?" ...read more.

Afterwards, she tells Stanley that she would never forgive him because "deliberate cruelty is unforgivable" To have someone who seemed so close to her turned against her must have hurt just as much if not more then many of Stanley's taunts and attacks. Stanley is primitive in his instincts which make him more defensible. The extent to which he is acting out of self-defence determines how we should feel about him. However there are very clearly cruel intentions behind many of his actions. Stella says that her husbands animal emotions are that he has and indeed the natural reaction to the invasion of territory both physically and the intrusion into his way of life is understandable. Stanley says that "be comfortable is my motto" and Blanche clearly makes him feel uncomfortable. Stanley's eventual victory is not only his personal victory but a victory of the new world over the old. Just as an animal should not be judged by human standards, if Stanley really is nothing more then an animal he should escape blame and indeed he should receive some degree of sympathy from the audience. However Stanley often appears too human to be reduced to the level of an animal. He deals with Blanche not only with natural instincts but with cruel actions motivated by his own selfishness. Something no animal is capable of and so demands our judgement. ...read more.