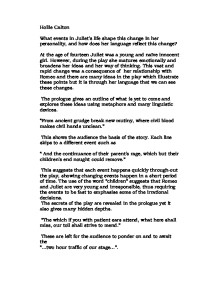 What events in Juliet's life shape this change in her personality, and how does her language reflect this change?

Hollie Calton What events in Juliet's life shape this change in her personality, and how does her language reflect this change? At the age of fourteen Juliet was a young and na�ve innocent girl. However, during the play she matures emotionally and broadens her ideas and her way of thinking. This vast and rapid change was a consequence of her relationship with Romeo and there are many ideas in the play which illustrate these points but it is through her language that we can see these changes. The prologue gives an outline of what is yet to come and explores these ideas using metaphors and many linguistic devices. "From ancient grudge break new mutiny, where civil blood makes civil hands unclean." This shows the audience the basis of the story. Each line skips to a different event such as " And the continuance of their parent's rage, which but their children's end nought could remove." This suggests that each event happens quickly through-out the play, showing changing events happen in a short period of time. The use of the word "children" suggests that Romeo and Juliet are very young and irresponsible, thus requiring the events to be fast to emphasise some of the irrational decisions. The secrets of the play are revealed in the prologue yet it also gives many hidden depths. ...read more.

When Romeo talks to Juliet, he talks about the situation being both holy and special. "O then dear saint, let lips do what hands do ; they pray, grant thou, lest faith turn to despair." This religious imagery tries to portray Romeo's love as sincere and devoted, like those of Religious followers. Romeo also uses more metaphors and tells Juliet that they too are like pilgrims on a religious Journey. "My lips, two blushing pilgrims ready stand to smooth that rough touch with a tender kiss". I believe that Romeo is attempting to say that both of them are like two pilgrims on a journey searching for something they both believe in. However, in this case I believe Romeo is talking about love, which is what they are searching for. This is when Juliet becomes more confident in answering and using her own initiative, rather than following examples set by her elders. "...Let lips do what hands do, they pray...". This expresses her confidence more thoroughly and shows an overpowering Juliet standing upon her own two feet. In Act 1 Scene 5 lines 127-140 Juliet begins to experience some disappointmentas she finds out Romeo is a dreaded Montague. "My only love sprung from my only hate, too early seen to known, and known too late." ...read more.

During this time Juliet's personality has changed, only slightly but dramatically enough that she has begun to shape her life by her choice, showing development in maturity. Juliet's emotional change throughout the play tends to jump from ecstatic to almost suicidal. As a young girl Juliet has depended upon her nurse. During the play the nurse defies Romeo and Juliet. She tells young Juliet that she should marry Paris leaving Juliet no-one to turn to who could understood how she felt. Juliet was left alone to make decisions that no teenager could possibly do. This abandoned feeling caused Juliet to feel alone and drastic feelings soon led to drastic measures. I believe that if Juliet had continued with her life she would have overcome over her love for Romeo. Her love for him seems more of a romantic attraction towards him. The treacherous options made his love more inviting and the uninviting parental consent just adds to the temptations, and as that wanting was "wanting what you can't have" it made that lust so much stronger. I believe that if her parents approved of Romeo, she would never have been so much "in love" as she claims. On the other hand, this part of her life also helped her to mature as a person but maybe that maturity should not have been the cost of their ghastly deaths. ...read more.