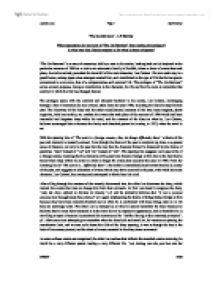 What expectations do you have of &quot;The Go-Between&quot; from reading the prologue? In what way does Hartley prepare us for what is about to happen?

'The Go-Between' - LP Hartley What expectations do you have of "The Go-Between" from reading the prologue? In what way does Hartley prepare us for what is about to happen? "The Go-Between" is a story of memories, told by a man in his sixties, looking back on his boyhood to the particular summer of 1900 on a visit to an aristocratic family in Norfolk, where a chain of events that took place, due to his na�vet�, provoked the downfall of the main character, Leo Colston. His two-week stay in a grand house, among upper-class strangers scarred him, and contributed to the type of life that he has grown accustomed to ever since, that of a companionless and removed life. The prologue of "The Go-Between" serves several purposes, being an introduction to the character, his life and how he came to remember that summer in which his life was changed forever. The prologue opens with the cultured and educated bachelor in his sixties, Leo Colston, rummaging through a box of memories he once owned, taken from the year 1900, including the diary he kept for that year. The discovery of the diary and the other miscellaneous contents of the box; rusty magnets, photo negatives, dried sea urchins, etc. awaken the events that took place of the summer of 1900 which had been concealed and forgotten deep within his mind, and the contents of the diary as what he, Leo Colston, believes encouraged him to become the lonely and detached person he is today, in 1953, when the novel is set. ...read more.

In the prologue it is clear that the novel will continue the theme of Leo's youthful idealism and ultimately his disillusionment. The choice of a new century and particularly the twentieth century provides an ideal setting for Leo's story. The older Leo recalls a specific time when he was a schoolboy at boarding school, the diary being one of his prides and joy's, and would flaunt it about in front of the other boys. The diary was then stolen and the use of the word "Vanquished" within it caused him to be severely bullied by two boys, Jenkins and Strode. The older Leo reflects on this and accepts his pretentious use of a word such as "vanquished" at the time of being a schoolboy and continues to recount how he got revenge, by writing three curses in the diary with his own blood. When the curses came to light and reality, he was respected, "afterwards I was quite a hero", p12, maybe even feared by the other schoolboys as Jenkins and Strode were both critically injured when the fell from the roof of a building. When Leo goes to look at the diary again, he sees assorted occurrences and affairs leading up to the two-week stay in Brandham Hall. After the noting of the name "Brandham Hall", he reads through the list of guests that stayed there at the same time as him, and also the noting of the maximum temperature for each day, up until the 26th of July, the last entry in the month of July and ...read more.

Even over fifty years later, it is made apparent to the reader that it obviously still bothers Leo, showing that he hasn't been able to fully bury the memories and cannot, even though he wants to, put it behind him. The last line of the conversation between the two contrasting Leo's, "try now, try now, it isn't too late" p 18, is an obvious desperate plea for closure of the subject by the older Leo in order to regain some normality to his life. The next paragraph tells the reader of how the voice of the younger Leo had haunted Leo as an older, more mature man, and that it had only confirmed his suspicions that he could no longer bury his memories, but had to confront them head on. The next stage brings the reader back to reality, "the clock struck twelve" p 18, sets the scene again, back to where Leo had been rifling through his old belongings. The last word of the prologue, "LEO", p18, furtherly accentuates his fascination with the zodiac as a boy and also his mild "egotism" at this age, for using his name as the code to the lock. In conclusion to what the prologue does for a reader in preparing them for the novel, is that in the way in which it is written, including intriguing flashbacks, memories and talk of the past, the author quickly has enraptured the readers attention into finding out what could have emotionally scarred the main character Leo, so much so, that it in return ended up ruining his life. Joanna Lowe Page 1 Ms Pomeroy 07/05/07 07:00 ...read more.