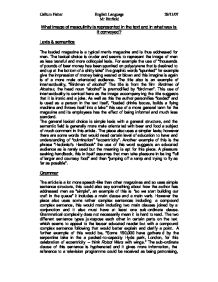 What Image of Masculinity is Represented in Loaded Magazine

What image of masculinity is represented in the text and in what way is it conveyed? Lexis & semantics The loaded magazine is a typical men's magazine and is thus addressed for men. The lexical choice is cruder and seems to represent the image of men as less tasteful and more colloquial lexis. For example the use of "thousands of pounds of beer money has been spunked on polystyrene that is destined to end up at the bottom of a s****y lake" the graphic words "spunked" for example give the impression of money being wasted or blown and this imagine is again is of a more male orientated audience. The title also is an example of intertextduality, "Birdmen of alcohol" The title is from the film Birdmen of Alcatraz, the head noun "alcohol" is premodified by "birdmen". This use of intertextduality is comical here as the image accompanying the title suggests that it is ironic and a joke. ...read more.

Grammar The article is a lot more speech-like than other magazines and so uses simple sentence structure, this could also say something about how the author has addressed men as "simple", an example of this is "so we start building our craft in the queue" it includes a main clause and a main verb. However the piece also uses some rather complex sentences including a compound complex sentence, this would main including two main clauses joined by a conjunction and it also must have at least one sub-ordinate clause. Grammatical complexity does not necessarily mean it is hard to read. The two different sentence types juxtapose each other in certain parts on the text which seems to appeal to the lesser educated reader but with a compound complex sentence following that would better explain and clarify a point. A further example of this would be, "Some 150,000 have gathered by the serpentine lake in the a packed-to-capacity Hyde park, London, for this celebration of eccentricity - think Robot Wars with wings." ...read more.

This could possibly be used as a kind of excuse for their poor performance. This is also refers back to the stereotypical male attitude of 'can't be bothered' that many people have. Phonology Phonology is the study of how sounds are organized and used in natural languages. Although the article is one of a more comic nature, there is little alliteration, which might be expected in a more comical piece, "pilot Piers" is an example; this has a sarcastic reference to the giant aeroplanes being 'piloted' by the "team loaded". The whole article has a real colloquial tone to it, and is informal however there is no direct reference to the reader as you might expect in a magazine. Discourse The general tone of the piece is one for very informal banter, it is more commonly known as 'pub talk', the type of subject matter and crude lexis and is usually associated with a male group of friends. ?? ?? ?? ?? Callum Fisher English Language 29/11/07 Mr Binfield ...read more.