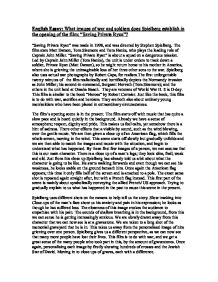 What images of war and soldiers does Spielberg establish in the opening of the film: &quot;Saving Private Ryan&quot;?

English Essay: What images of war and soldiers does Spielberg establish in the opening of the film: "Saving Private Ryan"? "Saving Private Ryan" was made in 1998, and was directed by Stephen Spielberg. The film stars Matt Damon, Tom Sizemore and Tom Hanks, who plays the leading role of Captain John Miller. "Saving Private Ryan" is about a squad on a dangerous mission. Led by Captain John Miller (Tom Hanks), the unit is under orders to track down a soldier, Private Ryan (Matt Damon), so he might return home to his mother in America, where she is grieving the unimaginable loss of her three other sons to the war. Spielberg also uses actual war photographs by Robert Capa, for realism.The first unforgettable twenty minutes of the film realistically and horrifically depicts the Normandy invasion as John Miller; his second-in-command, Sergeant Horvath (Tom Sizemore); and the others in the unit land at Omaha Beach. They are veterans of World War II. It is D-day. This film is similar to the book "Heroes" by Robert Cormier. Just like the book, this film is to do with war, sacrifice and heroism. They are both also about ordinary young men/soldiers who have been placed in extraordinary circumstances. The film's opening scene is in the present. The film starts off with music that has quite a slow pace and is heard quietly in the background. Already we have a sense of atmosphere; respect, dignity and pride. This makes us feel calm, yet somehow there is a hint of sadness. There other effects that a visible by sound, such as the wind blowing, over the gentle music. We are then given a close up of an American flag, which fills the whole screen, moving in the wind. This scene starts off slowly but gradually unfolds and we are then able to match the images and music with the situation, and begin to understand what has happened. ...read more.

This is just too much to take on board for us and men that young, so scared. Knowing that they have to do their country proud, but at the same time knowing that there is a huge chance they won't come back alive. 20 seconds, see you on the beach" Final orders that we hear being shouted across the boats. The sound is muffled, I suppose because what they are about to do just hasn't hit them or sunk in yet. Spielberg keeps us involved with these continuous images of war. We hear the shouting muffled as well, so we are involved. Spielberg is asking us to take the point of view of the people in the boat. Muffled speech, but the background noises are perfectly clear, we are hearing the things we want to hear and zoning out on the things we don't believe. One boy is praying, looking above and then holding his head below kissing his crucifix. Already we are not seeing images of the heroic side of what war is/ will become. We are seeing the terror when being prepared to fight, and all of the other gory details. It's not as glamorous as it seems which is what we are being told. I am now a soldier! Spielberg has placed me at the back of the boat. I am now part of this! First shot from the German machine gun post. It happens suddenly, the camera shakes. A whole host of people, chucked out of boats onto land, easy deaths, killed instantly. A terrible image of war. I am left till last, being at the back of the boat. I felt the tension, I was scared. All that worrying; fear and some of their lives are over in just a few seconds. Spielberg does it so well. Sowing us and letting us experience these images of war. Trying to make us equate with the fear, there is no drama, it is all in point of view. ...read more.

It's a dog eat dog world, and in there different ways both the film and the book show us this. War isn't something to be taken likely; it is about saving live lives, fighting for your country, whilst trying to protect yourself at the same time. People died, killed in very brutal and horrific, blood thirsty ways; people scarred emotionally by the whole experience and the whole horror of the event playing on their mind. This all happens to men of a very young age, so much so they might not even be called men yet, some even teenagers. It is a lot of pressure, and sometime they've got to crack. This is what Robert Cormier shows us in the book "Heroes" Where Francis Cassavant, suffers emotionally and physically, by his feelings and severe facial disfigurements. He then let the girl he loved get raped, he almost committed suicide, and he nearly killed someone else. And I'm sure it will occur later on in this film, as I think this is what the director will want to put across, how much war can affect you as a person. The book and the film show how unglamorous war can be and the other side to what we believe. Neither try to hide it and make it out to be an amazing experience, they show it for what it really is. Every gory detail of it shown/told in all its truth. I think that Spielberg successfully shows us images of war in an emotive way that makes us understand what the soldiers are going through. He creates an attack on our senses and an assault on our ears. There are only small areas of calm so deafness is a relief. Spielberg uses shocking visuals, with strong, perhaps emotive sounds. "Saving Private Ryan" gives us a great sense of reality, which makes the impact on us as the audience huge. A shocking film that gives us the truth behind going to war. By Tsuki Lian Harris ...read more.