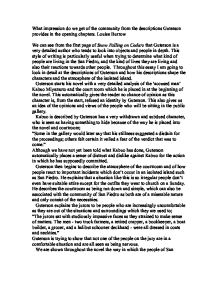 What impression do we get of the community from the descriptions Guterson provides in the opening chapters. Louise Burrow

What impression do we get of the community from the descriptions Guterson provides in the opening chapters. Louise Burrow We can see from the first page of Snow Falling on Cedars that Guterson is a very detailed author who tends to look into objects and people in depth. This style of writing is particularly useful when trying to determine what kind of people are living in the San Piedro, and the kind of lives they are living and also their reactions towards other people. Throughout this essay I am going to look in detail at the descriptions of Guterson and how his descriptions shape the characters and the atmosphere of the isolated island. Guterson starts his novel with a very detailed analysis of the 'accused man' Kabuo Miyamoto and the court room which he is placed in at the beginning of the novel. This automatically gives the reader no chance of opinion as this character is, from the start, refused an identity by Guterson. This also gives us an idea of the opinions and views of the people who will be sitting in the public gallery. Kabuo is described by Guterson has a very withdrawn and subdued character, who is seen as having something to hide because of the way he is placed into the novel and courtroom; "Some in the gallery would later say that his stillness suggested a disdain for the proceedings; others felt certain it veiled a fear of the verdict that was to come." ...read more.

We can see that the opinions of the past and present residents of San Piedro are very similar, as they all felt and feel very strongly about outcasts and foreigners. But as Guterson continues his description we are shown that a very large majority of the people are not initially from San Piedro; "Larsen's Pharmacy, a dime-store-with-fountain owned by a woman in Seattle, a Puget Power office, a chandlery, Lottie Opsvig's apparel shop, Klaus Hartmann's real estate agency, the San Piedro Caf�, the Amity Harbor Restaurant, and a battered, run-down filling station owned and operated by the Togerson brothers." This shows that the people of Amity Harbor are extremely hypocritical because they choose who they treat as outcasts and ho they decide to give American citizenship to. There maybe two ways of deciding why they choose to treat differently firstly people who look physically different from themselves, for instance eyes is seen as important feature throughout the novel as the Japanese as the San Piedro citizens distinguish them as being different because their eyes are slanted unlike theirs. Also people who have the same origin as people who have attempted to destroy the people of San Piedro, for instance, the Japanese and the attack of Pearl Harbour during World War II. On the contrary they should also hold the same feelings for Carl Heine as he is German, and his Country also have a background of misery towards the people of the island as they would of fought against the Germans during World War I. ...read more.

For instance Kabuo Miyamoto was affected by the war just as much as Ishmael Chambers and Carl Heine, but only Carl Heine out of the three is treated like a war hero rather than an outsider. Ishmael Chambers is treated like an outcast because he has had his arm amputated and Kabuo Miyamoto was treated like an outcast from the outset because of his background. The community of San Piedro has no respect for all the veterans of the war as all three of the people served in World War II, but only one of the men were actually fully respected for their service. This is useful to determine the real feelings and r****m of the people of San Piedro and also no-one can determine whether or not anyone is a treated like a true citizen of Amity Harbor, as Ishmael is treated as an outsider because of a loss of limb even though he is an American Citizen. In conclusion we can see that from Guterson's descriptions the people of San Piedro are hypocritical who are very r****t towards outsiders and foreigners. We can see from past and present that this r****m has always been there, the majority of the people of this isolated island feel this way. On the other hand most citizens are very subdued and appear to be very silent and private, as most live a life associating with little people and spending a lot of time on their own fishing for their families. ?? ?? ?? ?? ...read more.