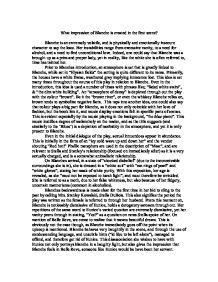 What impression of Blanche is created in the first scene of A Streetcar named disire?

What impression of Blanche is created in the first scene? Blanche is an extremely volatile, and is physically and emotionally insecure character to say the least. Her instabilities range from excessive vanity, to a need for alcohol, and a need to find unconditional love. Indeed, one could say that Blanche was a brought up as a prim and proper lady, yet in reality, like the white she is often referred to, time has tainted her. Prior to Blanches introduction, an atmosphere is set that is greatly linked to Blanche, while set in "Elysian fields" the setting is quite different to its name. Primarily, the houses have a white frame, weathered gray implying innocence lost. This idea is set many times throughout the course of this play in relation to Blanche. Even in the introduction, this idea is used a number of times with phrases like; "faded white stairs", & "the dim white building". An "atmosphere of decay" is depicted through out the play with the colour "brown". Be it the "brown river", or even the whiskey Blanche relies on, brown tends to symbolize negative facts. This taps into another idea, one could also say that colour plays a big part for blanche, as it does not only coincide with her love of fashion, but the book lets it, and music display emotions felt in specific parts of scenes. ...read more.

She views it as a "Horrible place", yet quickly corrects herself with extreme sarcasm, focusing on her ability to be something she is not. At this time, Blanche is relatively drunk, made evident by her "shaking all over the place", and her "panting". While Stella notices, she does not probe the situation, but tactfully leaves her sister to dominate the conversation. In doing so, Stella is forced to face the cruel reality that is Blanche. On meeting, the two were high on excitement, yet now; Stella is made to deal with the negative side as well as the sisterly side. This is evident when Blanche almost harasses Stella and states, "Only Mr. Edgar Alan Poe"(an American horror wrier) "could do it justice!" and yet still expects sympathy in saying "You're all I've got in the world". Stella, accustomed to blanches rambling, very rarely questions, or interrupts her. This depicts Stella to be a somewhat submissive character, yet able to be dismissive of Blanches irrational nature. Blanches' ability to draw attention to herself is highlighted through her questioning Stella's accusation that Stella never even made. This shows her judging Stella by her own standards, and jumping to conclusions. She also lies further about the alcohol stating, "One's my limit". As she goes on to explain why she left the school before questioning her appearance, and fishing for compliments, and later stating she "hasn't put on an ounce in ten years, she immediately states ...read more.

He is the epitome of the word lad, and carries an "animal joy" and heightened levels of testosterone in relation to other men. As we find out, this is not always a good thing. We are told how he judges women, and are brought down to the earth with a bang on his introduction to Blanche. There is a sharp contrast between the prior conversation between Stella and Blanche, and this one. Here, Stanley is the dominant one, and we get a sense of Blanche rambling excessively. He is Giving Blanche the 'once over' to find out exactly what he is letting himself in for. He then makes a brash remark in conversing with Stella through the toilet door, and this is the primary sign of a real clash between Stanley and Blanche. , yet in asking of her husband, a melancholy mood is injected into the play through the polka music, and blanche fainting. This first scene portrays a weak character in need of self assurance, yet unaware, that her only real problem is herself. If in doubt about something she wishes not to be in doubt of, she will 'prod' the situation until even she believes the truth is what she wishes it to be. She is unaccustomed to this new breed of people, or indeed surrounding, and is at odds with it in every way, as displayed in her entrance. Blanche is a total juxtaposition of Stella, used by Williams to show the degree of variation chance, and actions can make on a persons life. ...read more.