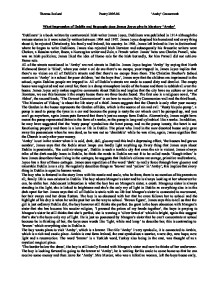 What impression of Dublin and its people does James Joyce give in his story 'Araby' 'Dubliners' is a book written by controversial Irish writer James Joyce, Dubliners was published in 1914 although the various stories in it were actually written between 1904 and 1907. James Joyce despised his homeland and every thing about it; he rejected Christianity, his family and Ireland, his country. In 1904, James left Ireland to live in Switzerland where he began to write Dubliners. James also rejected Irish literature and subsequently his favourite writers were Chekov, a Russian writer, Ibsen, a Norwegian writer and Zola, a French writer. James' hero was Charles Parnell, who was an Irish politician; James liked the idea of Home rule for the Irish but sadly, for him Parnell did not achieve Home rule. All of the streets mentioned in 'Araby' are real streets in Dublin. James Joyce begins 'Araby' by saying that North Richmond Street is 'blind', when you enter a cal de sac there's no escape, your trapped in, James Joyce implies that there's no vision on all of Dublin's streets and that there's no escape from them. The Christian Brother's School mention in 'Araby' is a school for poor children, 'set the boys free', James says that the children are imprisoned in the school; again Dublins people are trapped in. ...read more.

Every thing that James says about Dublin is pessimistic, 'the cold air stung us', Dublin is such a terrible city that even the air is violent, James always talks of the dark muddy lanes in Dublin, he think the roads in Dublin are not ft to be called roads. 'Rough tribes' is how James describes those living in the cottages, he suggests that Dublin's citizens are savage, primitive and barbaric, Joyce has a fear of those cottages. James uses repetition of the word 'dark' to really force through how gloomy and miserable Dublin is as a city. He regularly describes things as 'brown' and 'yellow' in 'Araby'; this implies that every thing in Dublin is equal to human waste. The boy who is featured in the story lives with his auntie and uncle, who he fears, there is no mention of his parents as all; family life is non-existent in Dublin. The boy adores Mangan's sister and he is always looking at her whenever he can, he stalks her. Adolescent infatuation is what the boy has on Mangan's sister, a crush. Mangan;s sister is always standing in the light, she is linked to brightness and she's the only ray of light in Dublin as everything else is in the dark apart for her. ...read more.

After Mrs Mercer had left, the boy felt uneasy, as his uncle had not yet come back, the boy was afraid that he might miss the bazaar and therefore not be able to buy Mangan's sister a present and to subsequently begin a new life with her. At last, the boy's uncle arrives home but he is drunk and has totally forgotten about the bazaar. 'I'm afraid you may put off your bazaar for this night of our Lord', James implies that the 'Lord' is stopping the boy from going to the bazaar; again religion is restricting Dublin's people from doing what they would like too. Finally, the boy is able to leave for the bazaar after reminding his drunk uncle to give him the money, he hops onto a 'deserted train' and leaves for the bazaar, the train is deserted, James says that life in Dublin is boring and dull. The train is deserted and it is a 'third-class carriage which is dirty and of poor quality like Dublin. When the boy makes it to 'Araby' the bazaar is over already however he enters and takes a look round a stall to see if he can find a suitable present for Mangan's sister. At the stall at which the boy looks there is a woman and two men, they are talking in a very flirtatious manner. ?? ?? ?? ?? Thomas Rutland Poetry 2005-06 'Araby' Coursework ...read more.