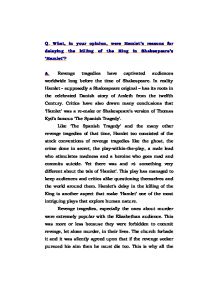 What, in your opinion, were Hamlet's reasons for delaying the killing of the King in Shakespeare's 'Hamlet'?

Q. What, in your opinion, were Hamlet's reasons for delaying the killing of the King in Shakespeare's 'Hamlet'? A. Revenge tragedies have captivated audiences worldwide long before the time of Shakespeare. In reality Hamlet - supposedly a Shakespeare original - has its roots in the celebrated Danish story of Amleth from the twelfth Century. Critics have also drawn many conclusions that 'Hamlet' was a re-make or Shakespeare's version of Thomas Kyd's famous 'The Spanish Tragedy'. Like 'The Spanish Tragedy' and the many other revenge tragedies of that time, Hamlet too consisted of the stock conventions of revenge tragedies like the ghost, the crime done in secret, the play-within-the-play, a male lead who stimulates madness and a heroine who goes mad and commits suicide. Yet there was and is something very different about the tale of 'Hamlet'. This play has managed to keep audiences and critics alike questioning themselves and the world around them. Hamlet's delay in the killing of the King is another aspect that make 'Hamlet' one of the most intriguing plays that explore human nature. Revenge tragedies, especially the ones about murder were extremely popular with the Elizabethan audience. This was more or less because they were forbidden to commit revenge, let alone murder, in their lives. The church forbade it and it was silently agreed upon that if the revenge seeker pursued his aim then he must die too. This is why all the revenge tragedies of that time concluded with the protagonist dying. To me it seems as if Hamlet has been continually delaying avenging his father's murder. Ideas of mere procrastination surface when Hamlet is compared to the young Prince Fortinbras. ...read more.

Hamlet is torn between his duty as a son and his responsibility towards his moral beliefs. This brings us to look at Hamlet's character as a reason for his delay in the killing of the King. Hamlet's character is what made the whole play very different from the other revenge tragedies of that time. Hamlet's character is one of Shakespeare's most complex characters. Perhaps this is why he is a source of fascination to most of his audience as well as critics. His humanity makes him a very appealing personality. He symbolizes what many of us are constantly doing - asking questions. Unanswered questions are silently asked throughout the play like whether or not Queen Gertrude was a conspirator in King Hamlet's murder, whether the King's spirit is friendly or a demon or whether Ophelia dies accidentally or commits suicide. Hamlet's ironical situation probably made the audience more interested in the outcome. Hamlet would be the very last person imaginable in the play to commit murder. Yet he is the one who is assigned the role of an avenger. This adds to the many reasons why there is substantial delay before the actual deed is committed. His situation - or rather his reaction to the situation - make the play on the whole very intriguing. Shakespeare needed Hamlet's humanity to capture and sustain the audience's interest in the play. If all were as easy as it seemed, and the characters had no development in their roles, the play would have been over in the first Act itself. But this would not have made it one of the most successful revenge plays in the history of English Literature. ...read more.

His wordings lead us to believe that the quintessential philosopher. But many have asked the reason to why Hamlet, being the sensitive person he was, kills Rosencrantz and Guildenstern and Polonius. I feel that these murders were done in a fit of rage. We have seen how Hamlet seems to go with the moment for a short while and then come back to reality, without any substantial action taken. I believe the same thing happened here. When hamlet discovered that there was someone behind the curtain he, perhaps impulsively, killed the person, in a fit of rage. As for Rosencrantz and Guildenstern Hamlet probably sent them off too their death to get them out of the way. He believed that they would be a hindrance to his revenge. There are, throughout the play, many reasons as to why Hamlet delayed the killing of the King until the last scene. Some critics even believe that he only did manage to kill the King at the end because the King poisoned his mother. He took revenge for his mother's, not father's murder. There are many justifications for Hamlet's delay and they can be interpreted into whether he was just procrastinating or whether they were truly understandable basis for delay. In conclusion I feel that Hamlet delays the King's murder because of his own character. If he were more like Laertes or Fortinbras the play could have had a different conclusion. But his character - or rather his mind - stood in the way even when he had many an opportunity to kill Claudius. External events might not fully contribute to Hamlet's delay but can be - and perhaps were - used as a reason or an excuse to further delay avenging his father's murder. ...read more.