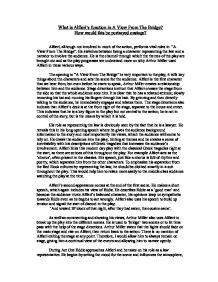 What is Alfieri's function in A View From The Bridge? How would this be portrayed on stage?

What is Alfieri's function in A View From The Bridge? How would this be portrayed onstage? Alfieri, although not involved in much of the action, performs vital roles in "A View From The Bridge". He switches between being a character representing the law and a narrator to involve the audience. He is the channel through which the themes of the play are brought out and as the play progresses we understand more on why Arthur Miller used Alfieri in these various ways. The opening to "A View From The Bridge" is very important to the play, it tells key things about the characters and sets the scene for the audience. Alfieri is the first character that we hear from, but even before he starts to speak, Arthur Miller creates a relationship between him and the audience. Stage directions instruct that Alfieri crosses the stage from the side so that the whole audience sees him. ...read more.

Alfieri's second appearance comes at the end of the first scene. He makes a short speech, which again includes his view of Eddie. He describes Eddie as a 'good man' and because the audience trusts Alfieri's balanced character, his opinions keep us sympathetic towards Eddie even as he begins to act wrongly. Alfieri also uses his speech to build up tension and signal the start of discord in the play; 'And toward 10'clock of that night, after they had eaten, the cousins came'. As well as commenting and showing his views, Arthur Miller also uses Alfieri to break up the play into the different scenes. He is used to 'bridge' two scenes or to let time pass with the help of the stage directions. Arthur Miller states that the lights should fade on the main stage and rise on Alfieri, then return back to the action. There is no mention of Alfieri exiting the stage at any point. ...read more.

The description of 'eyes like tunnels' back up the certainty of the one only conclusion and so Alfieri should speak his lines with despair. In the final scene, after Eddie's death, the stage lights 'glow' around Alfieri. This should be done so that the audience can focus on him giving his final soliloquy to settle the audience after the dramatic final scene. His words of wisdom about settling for half rounds the play off, giving it a sense of completion and leaves the audience to think over his words and his view as the bridge between the law and life. Throughout the play Alfieri has helped Arthur Miller to write his 20th Century tragedy by bringing out the themes of the role of the law, and settling for half. He has become a friend to the audience by the end and his narration has been vital to the play and the audience's enjoyment of it. ...read more.