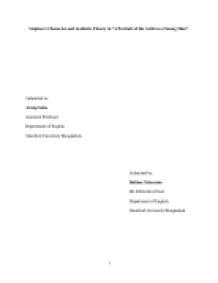 What is the connection between the &quot;artist&quot; and &quot;young man&quot; of Stephen Dedalus' character in A Portrait of the artist as a young man? * How does Stephen make difficult moral and aesthetic choices that help to define his character?

Ã¯Â»Â¿Stephen's Character and Aesthetic Theory in â€œA Portrait of the Artist as a Young Manâ€ Submitted to: Aroop Saha Assistant Professor Department of English Stamford University Bangladesh Submitted by: Halima Tabassum ID: ENG 063-07441 Department of English Stamford University Bangladesh Dedication I would like to dedicate my thesis to my Supervisorâ€” Aroop Saha whose love, affection, encouragement, and blessings of days and nights have always been a source of inspiration for me. Declaration I certify that the work presented in this dissertation is my original work to the best of my knowledge and belief. The contributions of other sources and information have been acknowledged wherever they have been used. I, hereby, declare that I have not submitted this material, either in a whole or part, previously or concurrently in this or any other institution. Signature: Halima Tabassum ID: ENG 06307441 November, 2021 Acknowledgement First, I would like to thank almighty Allah for completing my Thesis paper on time and for giving me the physical and mental strength. I immensely thank my thesis supervisor Mr. Aroop Saha for her supportive guidance and precise responses. Without her support and guidance, it would have been very difficult for me to complete the thesis on time. I would like to thank my friend Shamima Sultana for helping me out spontaneously, especially for the progression of this paper. I would like to thank some of my closest friends: Farzana Miti, Asma Ul Hosna, Sharoar Hossain, and many more for their mental support. I want to thank the participants who took part in my research section. I would also like to show my respect and love towards my parents and cousins for their support and encouragement. Abstract Stephen Dedalus showed that Joyce tried to capture the insufficiency of self-awareness and freedom in his life, which comes into contact with universal feelings of detachment, guilt, and awakening. The result's the relationships that are supported wrong factors and consequently rather than shaping a brand new possibilities, results in loss, failure, and destruction. ...read more.

Perhaps the foremost telling characterization of him occurs during the episode set in Cork. Here, Joyce describes Stephen as "proud and sensitive and suspicious, battling against the squalor of his life and also the riot of his mind." within the last chapter Stephen confides to his friend Cranly that he will henceforth depend on "the only arms I allow myself to useâ€”silence, exile, and cunning." Given the originality of James Joyce's conception of this character, it's significant to notice that the book ends not with Stephen himself but with excerpts from his diary that show his intention to "go to encounter for the millionth time the fact of experience and to forge within the smithy of my soul the uncreated conscience of my race." A Portrait of The Artist as a Young Man is one amongst the foremost notable works of James Augustine Aloysius Joyce. The novel deals with the expansion of an artist, Stephen Dedalus, who is additionally the central character of this novel. Within the last chapter, the reader comes across his idea of â€œAesthetics.â€ The word â€œAestheticâ€ means ideas concerned with beauty or the appreciation of beauty. Stephen develops his ideas on aesthetics supported Aristotle and Aquinas. The ultimate chapter of the novel release showing Stephen going out of the house annoyed and frustrated wandering through rainy Dublin roads, he quotes poems and worries the aesthetic theories of Aristotle and Aquinas. We see two Latin quotations of Aquinas. The primary one means, â€œThose things are beautiful the perception of which pleasesâ€. The second means, â€œThe good is that toward which the appetite tends.â€ We all know that Aristotle may be a famous Greek philosopher and St. Thomas may be a renowned philosopher of the center Ages that they had significant contributions to aesthetic theory. Stephen asserts three propositions on aesthete: I. Art is a stasis brought about by the formal rhythm of beauty. ...read more.

Aims to be objective and scientific in its approach. Quantitative research is hypothetic-deductive in its approach to constructing social theories. Aims to assess and measure. Is regarded as a way to get to the truth, to understand the world well enough so that we might predict and control it through identifying cause and effect relationships. Quantitative research can be administered by the researcher, self-administered, one-to-one group, face-to-face, telephone, postal, email. In this research, I have used the qualitative method. It is a secondary data collection process. The sources of the secondary data collection process were publications, research studies, and journals. My literature review also includes my own opinion, and feelings. Chapter 4 Findings In the application of our qualitative research under thematic analysis, the full novel divided into five chapters, and also the fifth chapter is that the aesthetic concept. The dean's inability to grasp Stephen's use of the word "tundish" could seem quite a minor detail, but it symbolizes the clash of cultures that's at the middle of land experience. The dean is English and represents to Stephen all the institutional power and prestige England has wielded throughout its colonial occupation of eire. The dean is thus a representative of cultural domination. By failing to grasp Stephen's wordâ€”which springs from Irish instead of Englishâ€”the dean reminds us of the linguistic and cultural divide between England and Ireland. With sadness and despair, Stephen reflects that this divide could even be unbridgeable, and his disappointment underscores the discontent he already feels for stale university life. The episode with the dean shows Stephen importance of making his language, because country, he has been using isn't his own. He realizes that English "will always get on behalf of me an acquired speech. i've got not made or accepted its words. My voice holds them cornered." Joyce reinforces this idea of speaking someone else's language throughout the novel through repeated uses of quoted speech from a diffusion of external sources. The opening lines of the novel, for example, are a child's story told by somebody else. Later, we discover Stephen frequently quoting Aquinas and Aristotle. ...read more.