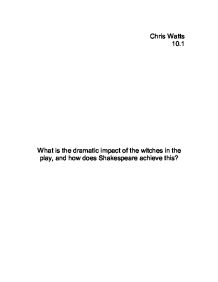 What is the dramatic impact of the witches in the play, and how does Shakespeare achieve this?

Chris Watts 10.1 What is the dramatic impact of the witches in the play, and how does Shakespeare achieve this? William Shakespeare was an English playwright, nationally acclaimed as one of the greatest dramatists. 'Macbeth' is a tragedy written by William Shakespeare, it was based on the career of a character called Macbeth, his play was possibly performed as early as 1606. The play is a powerful study of the character Macbeth's ambition. The two main characters, Macbeth and Lady Macbeth have been used as a muse for some of the main actors in the world today, with their strong acting performances. The Italian composer Giuseppe Verdi used Shakespeare's Macbeth to provide the basis for his opera with the same name, in 1847. ...read more.

The witches, make predictions as to what will happen in Macbeth's life. 'When the hurly-burley's done, when the battle's lost and won.' Witches, Line 3, Act 1 Scene 1 The witches talk in almost riddle like sentences, which really throws a mystical aspect to any point at which they are involved. 'Fair is foul, and foul is fair, hover through Fog and filthy air.' Witches, Line 12 act 1 scene 1 The witches express the power that they posses, and this is illustrated throughout the whole play. The witches make a comment about the death of a pilot. 'Here I have a pilot's thumb, wrecked as homeward he did come.' Witches, Line 26 act 1 scene 3 Throughout the play Macbeth shows his ambition in life, to become something better. ...read more.

The stage directions in act 1 scene 3 are exactly the same as act 1 scene 1, this attaches the same fear that was gained at the opening of the play. Shakespeare creates a scene where the character Macbeth returns very soon to the witches, this is because he needs more information on what the witches have already told him. When Macbeth enters and speaks his first line, "So foul and fair a day I have not seen." Macbeth, line 36 act 1 scene 3 This means that Macbeth already has experienced a strange day with the weather and atmosphere, it is almost although he is predicting the presence of the witches. To conclude, Shakespeare uses different techniques for using the witches to create dramatic tension, the main way he used the witches was in the way they make their predictions, as to what will happen in Macbeth's life. ...read more.