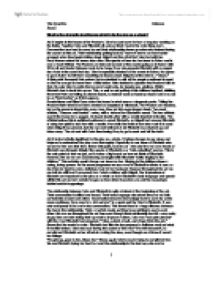 What is the dramatic significance of Act 2 to the play as a whole? Act 2 begins in the house of the Proctor's. John has just come in from a long day working on the fields

What is the dramatic significance of Act 2 to the play as a whole? Act 2 begins in the house of the Proctor's. John has just come in from a long day working on the fields. Together John and Elizabeth sit and eat their meal in the main living room. Conversation was hard to come by and their relationship shows up extremely strained during the course of this act. Their relationship getting back to "normal" seems an even harder prospect when they begin talking about Abigail and the affair that John had with her. Mary Warren enters the scene soon after. She speaks of how she has been to Salem and is now a Court Official. The Proctors are told and warned of the events going on in Salem with 39 in jail and Goody Osbourn ready to be hung. Mary also presents Elizabeth with a poppet she made in the court that day. John is especially shocked at the events in Salem, he agrees to go to Salem to tell them everything he knows about Abigail and that she is a "w***e." At this point Reverend Hale enters. He has decided to visit all the people mentioned in court so that he can get to know them a little better. Hale decided to question the Proctor's faith in God. He asks John to recite the ten commandments, he forgets one, adultery. Which Elizabeth has to back him up on. This, as well as not getting all his children baptised, disliking Reverend Paris and failing to attend church, to instead work on Sundays shows John may not be as "God fearing" as it first appears. ...read more.

"You will tell the court" he shouts. However even though the shouting might sound angry he is in such a state through pure fear for his wife. We lose every last inch of sympathy for Abigail also at this point. The final bit of fear I have picked out during this act is that of Elizabeth. She is afraid of Abigail and what Abigail might do so that she can have John to herself. This is the reason why Elizabeth is parts of the act comes across insecure as she is fearful of losing her husband. The theme of tyranny is shown, not only in Elizabeth's arrest but, in various other places earlier in the act as well. We learn of the events happening in Salem through Elizabeth and first hand from Mary. How the fear is escalating more and more. Conversations between John and Elizabeth and John and Mary are a vital source of information for the audience. Who use this as their way of getting updated over what is happening in Salem. The tyranny is made more personal. The audience share John's outrage and shock as it's the first the audience have heard of the events in Salem as well. Though the situation is bad in Salem; it is made out to be a lot worse through Mary Warren. Her fear for Abigail shows up as she speaks of the girls power in a staggering way. After hearing all of this from Mary and then as the act progresses other people John realises that he will have to tell the court about Abigail. ...read more.

Even just being suspected meant one was a traitor. Many people were harassed constantly for names of other communists or sympathisers. In conclusion, this act has great dramatic significance to the play as a whole because we learn of the true personalities many of the characters actually hold. For instance with Elizabeth we find out what she is really like, instead of what Abigail thinks she is like. We learn in more detail about the relationship between Elizabeth and John Proctor. We learn how even though John did commit adultery they still love each other enough to try and mend their marriage. This act also brings us away from events happening else where in the play and helps us to understand more of what happens in the lives of a family. The act does generally prepare us for the rest of the play in its entirety. Especially events involving John Proctor. Its prepares us for him going to court to tell all that he knows. Vital events unfold during this act as well, such as Elizabeth getting arrested. We also see whether John is a strong enough man to lose his "good" name to instead tell the truth about his affair. The act to the audience has a massive impact. The play has so many shoots that all come of this one act which help us understand things from the first act in a easier sense as well as helping us to understand events all the way to the very end. Without this act the entire play would lose its feel. It would be confusing and hard to follow; you could, in fact, call this act the "base" to the whole play. ?? ?? ?? ?? The Crucible Rebecca Excell ...read more.