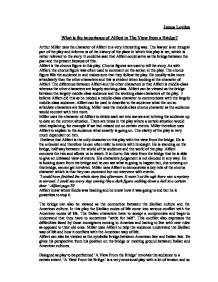 What is the importance of Alfieri in The View from a Bridge?

James Levitas What is the importance of Alfieri in The View from a Bridge? Arthur Miller uses the character of Alfieri in a very interesting way. The lawyer is an integral part of the play and informs us of the history of the place in which this play is set, which is rather relevant to the story. It could be said that Alfieri could serve as the bridge between the past and the present because of this. Alfieri is the chorus figure in this play. Chorus figures are used to tell the story. As with Alfieri, the chorus figure was often used to comment on the action in the play. The chorus figure fills the audience in and makes sure that they follow the play. He usually talks more articulately than the other characters and this is evident when looking at the character of Alfieri. The difference between Alfieri and the other characters is that Alfieri is middle-class whereas the other characters are largely working-class. Alfieri can be viewed as the bridge between the largely middle class audience and the working class characters of the play. I believe Alfieri did this as he needed a middle-class character to communicate with the largely middle-class audience. ...read more.

He does this by using calm scenes between those of high tension. After the tense scene where Eddie kisses Rudolpho, Miller slightly eases the tension by having a calm scene with Alfieri following this. The main method for easing tension is the chorus figure. The scenes featuring Alfieri are usually those of low tension and so he is used to create balance and control the audience's emotions. Miller uses the character of Alfieri as the chorus character for a number of reasons. The audience respect his opinion as he holds a respected position in society (As in he is a lawyer), and he seems to possess this uncanny knowledge of events which makes him reliable. Alfieri is also a likeable character and one can empathise with his character. In most of the scenes involving Alfieri he develops the action, moving time forwards and setting the new scene and developing situation. Miller uses the character of Alfieri to give the audience subtle clues as what is to come next. When the story of Vinnie Bolzano has been told, the audience know that this story is being told for a reason and this reason is only apparent by the end of the play. ...read more.

As Alfieri says in the penultimate scene, 'Only God makes justice'. In Red Hook, harbouring Italian workers and relatives who have come to work in America is seen as just by the Italian-American community but is still illegal in the eyes of the law. Reporting illegal immigrants is considered an unjust or bad thing by the community, even though it furthers the interests of the law. When Alfieri says that justice is very important there, he is not referring to state or legal justice. Miller uses Alfieri to give the audience an insight into the Sicilian ethics and culture. Alfieri also explains to the audience the compromise the community has made, half accepting the rule of law, and half living with their own codes. The Sicilian community used to be very unruly and violent and settled disputes and vendettas the way they wanted to with total disregard for the American law. This was the mob law practiced by Italian-American mafia gangsters like Al Capone. However Alfieri states that the American system of law has now been accepted as in they settle for half. When this statement is repeated at the end of the play, he adapts the statement to 'most of the time now we settle for half'. This means that there are still violent resolutions of arguments and conflicts which show that the Italian concept of justice still remains in America. ...read more.