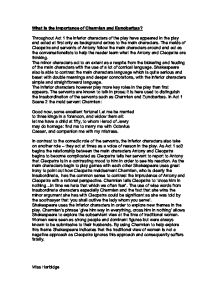 What is the importance of Charmian and Eunobarbas

As the main characters begin to play games with each other Shakespeare uses great irony to point out how Cleopatra maidservant Charmian, who is clearly the insubordinate, has the common sense to contrast the imprudence of Antony and Cleopatra with a rational perspective. Charmian tells Cleopatra to 'cross him in nothing...in time we hate that which we often fear'. The use of wise words from insubordinate characters especially Charmian and the fact that she wins the minor argument she has with Cleopatra could be significant as she was told by the soothsayer that 'you shall outlive the lady whom you serve'. Shakespeare uses the inferior characters in order to explore new themes in the play. ...read more.

Charmian is on familiar terms with her mistress and can tease her about her past life and former lovers. Shakespeare did this to help stress their importance. Shakespeare also expands the language connotations of the inferior characters to help emphasize their importance. The servant of Antony named Enobarbas is seen immediately in the play as dislikable character that uses a lot of bawdy humor 'she makes a shower of rain as well as Jove'. However Enobarbas when speaking to Antony about whether they must leave due to Fulvia's death answers 'the business that you have broached here cannot be without you especially that of Cleopatra, which wholly depends on your abode.' This again shows how the inferior characters show how the main characters have lost an element of rationale - that if Antony leaves Egypt he is in effect leaving Cleopatra forever. ?? ?? ?? ?? Miss Harbidge ...read more.