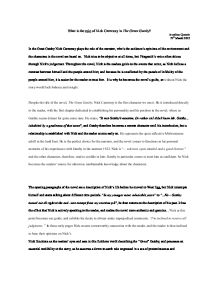 What is the Role of Nick Carraway in the Great Gatsby?

What is the role of Nick Carraway in The Great Gatsby? Jonathan Quaade 29th March 2012 In the Great Gatsby Nick Carraway plays the role of the narrator, who's the audience's opinions of the environment and the characters in the novel are based on. Nick tries to be objective at all times, but Fitzgerald's voice often shines through Nick's judgement. Throughout the novel, Nick is the readers guide to the events that occur, as Nick defines a contrast between himself and the people around him, and because he is unaffected by the parade of infidelity of the people around him, it is easier for the reader to trust him. It is why he becomes the novel's guide, so without Nick the story would lack balance and insight. Despite the title of the novel, The Great Gatsby, Nick Carraway is the first character we meet. He is introduced directly to the reader, with the first chapter dedicated to establishing his personality and his position in the novel, where as Gatsby seems distant for quite some time. He states, "It was Gatsby's mansion. Or rather as I didn't know Mr. Gatsby... inhabited by a gentleman of that name", and Gatsby therefore becomes a remote character until his introduction, but a relationship is established with Nick and the reader occurs early on. ...read more.

Ironically enough, this really isn't the case. He makes an exception to that statement when he judges Gatsby, whom he says has an, " an extraordinary gift for hope, a romantic readiness such as I have never found in any other person and which it is not likely I shall ever find again," but he also mentions that Gatsby represents everything he has "unaffected scorn" for. It shows that Nick is trustworthy and objective, but also has some biased opinions that the readers takes on as their own due to his credibility. Fitzgerald establishment of Nick's reflective and tolerant personality is vital to the comprehension of the novel's context. We can't dismiss him as a character as his perspective on the events becomes the reader's opinions as well. Nick' aims to be truthful and objective, which makes the reader and the characters trust him. He is not one of the "careless people," but he has conscience and is unselfish, and demonstrates this decency at Gatsby's funeral. A stark contrast to the demonstrative, superficial and selfish natures of characters like Tom and Daisy, who step on everything and everyone in their way. When he says that Gatsby has a "rare smile with a quality of eternal reassurance in it," we know Nick's isn't being charmed by his riches or parties; but is telling it to us frankly. ...read more.

He is an author who "speaks" indirectly to us through Nick. Fitzgerald makes amusingly contemptuous remarks about his environment that shows a sense of humour and as a result doesn't bore the reader in the long run. Nick often functions as Fitzgerald's voice such as the extended mediation on time, and the American Dream at the end of Chapter 9 where Fitzgerald seems to shine through the words on the page. While Gatsby and what he stands for is clearly the focus of the book, an argument can be made that Nick is the main character of the novel. The reader becomes attached to Nick so early on, and base our opinions on his observations that if we were deprived of him our perspective on this world would become extremely disparate. Nick is a more in-depth and trustworthy character in novel and since practically every part of the story is described to us with his thoughts and his perceptions, it is hard for him not to the main character, especially since Fitzgerald's opinions are presented through him. The reader leaves the story feeling they understand whose actions and judgments they support. He is the narrator but his involvement in the events, no matter how much he tries to stay objective, ultimately, fabricate the reader's opinions due to his trustworthiness and tolerance. ...read more.