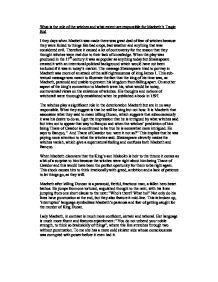 What is the role of the witches and what extent are responsible for Macbeth's Tragic End.

What is the role of the witches and what extent are responsible for Macbeth's Tragic End I they days when Macbeth was made there was great deal of fear of witches because they were linked to things like bad crops, bad weather and anything that was considered evil. Therefore it caused a lot of controversy for the reason that they thought witches were real due to their lack of knowledge. When the play was produced in the 17th century it was as popular as anything today but Shakespeare created it with an intentional political background which would have not been included if it was in today's market. ...read more.

The witches play a significant role in the deterioration Macbeth but are in no way responsible. What they suggest is that he will be king but not how. It is Macbeth that associates what they said to mean killing Ducan, which suggests that subconsciously it was his desire to do so. I get the impression that he is intrigued by what witches said but tries not to appear that way to Banquo and when the witches' prediction of him being Thane of Cawdor is confirmed to be true he is somewhat more intrigued. He says to Banquo, " And Thane of Cawdor too: went it not so?" ...read more.

Macbeth after killing Duncan is a paranoid, fretful, fractious man, a fallen hero beset bathos. He jumps from one tortured, anguished thought to the next, with his lines jumping from one short clause to the next: "Who's there? What ho!" Not only do his lines have punctuation at the end, but they also feature it mid-line. This is broken up, 'interrupted' language symbolizes Macbeth's paranoia and fear of getting caught for the murder of King Ducan. Lady Macbeth, in contrast is much more confident, certain and rational. Her language is much more fluent and features enjambment: "You do not unbend your noble strength, to think so brainsickly of things", where this line stretches through two without punctuation. To me she has a more cold sinister side whose consciousness was corrupted with power before it even had it. ...read more.