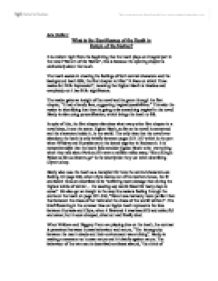 What is the Significance of the Heath in Return of the Native?

Jane Stollery What is the Significance of the Heath in Return of the Native? It is evident right from the beginning that the heath plays an integral part in the novel "Return of the Native", this is because the opening chapter is exclusively about the heath. The heath assists in creating the feelings of both central characters and the background heath folk, the first chapter is titled "A Face on which Time makes but little Impression", meaning that Egdon Heath is timeless and everybody on it has little significance. The reader gains an insight of the novel and its genre through the first chapter, "It had a lonely face, suggesting tragical possibilities." This aids the reader in identifying that there is going to be something tragical in the novel. Hardy is also using personification, which brings the heath to life. ...read more.

the wasting sap would bleed for many days to come". We also get an insight to the way Eustacia is feeling through the storm on the heath on page 345-346, "Never was harmony more perfect than that between the chaos of her mind and the chaos of the world without". The brief flowering in the summer time on Egdon heath represents the love between Eustacia and Clym, when it flowered it was beautiful and colourful and sweet, but it soon drooped, dried out and finally died. When Wildeve and Diggory Venn are playing dice on the heath, the contrast is prominent between human behaviour and nature, "The incongruity between the men's deeds and their environment was striking". Hardy is making a comment on human nature and it's battle against nature. The behaviour of the two men is described as almost absurd, "the chink of guineas, the rattle of the dice, the exclamations of the players combined to form such a bizarre exhibition of circumstances as had never before met on those hills". ...read more.

On pages 86-87, they are both having a conversation on how they dislike the heath, "You hate the heath as much as ever; that I know", "I do ... Tis my cross, my misery, and will be my death". It is ironic when Eustacia says that as she does go on to die on the heath. They are the only two characters that die whilst trying to escape from the heath during the storm on pages 360-361. It seems almost as if the heath punishes the people who will not live in harmony with it and continue to repel it. However, it is unclear whether or not Eustacia took her own life because she was in so much despair for loathing of the heath, or she accidentally fell into the stream. In conclusion the heath plays a very important role within the novel, it is not only the setting or the background, but every character is in some way interwoven with it, whether they are fighting against it or living in perfect harmony with it. ...read more.