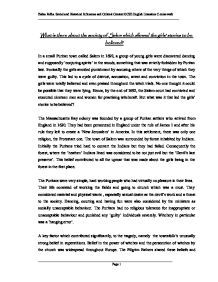 What is there about the society of Salem which allowed the girls&amp;#146; stories to be believed?

What is there about the society of Salem which allowed the girls' stories to be believed? In a small Puritan town called Salem in 1692, a group of young girls were discovered dancing and supposedly 'conjuring spirits' in the woods, something that was strictly forbidden by Puritan law. Ironically the girls avoided punishment by accusing others of the very things of which they were guilty. This led to a cycle of distrust, accusation, arrest and conviction in the town. The girls were totally believed and even praised throughout the witch trials. No one thought it could be possible that they were lying. Hence, by the end of 1692, the Salem court had convicted and executed nineteen men and women for practising witchcraft. But what was it that led the girls' stories to be believed? The Massachusetts Bay colony was founded by a group of Puritan settlers who arrived from England in 1630. They had been persecuted in England under the rule of James 1 and after his rule they left to create a 'New Jerusalem' in America. In this settlement, there was only one religion, the Protestant one. ...read more.

When the people could not find any reason for an illness i.e. crops failing or children dying at birth, they were told 'to look to unnatural things for the cause of it' as was the case with Betty's illness . It is easy to see how in a society with so few scientific answers, its members might attribute such events to the 'devils work'. The Puritans narrow-mindedness is also apparent when Martha Corey was arrested on the allegation of 'reading strange books' as they thought reading books other than the bible as 'vain enjoyment' Yet not everyone in Salem was uneducated; Reverend Hale for one whose 'books were weighted with authority' was regarded as a prominent educated figure. He was the minister of Beverley and a self-proclaimed expert when it came to 'finding signs of the Devil', but he too was fooled . Although he was the first to realise that the girls were nothing more than frauds, he did not actually quit the court until John Proctor was taken into custody. Let us now take into consideration another 'educated' man , namely Deputy Governor Danforth - a supposedly God-fearing man who was sent to restore 'purity' to the town. ...read more.