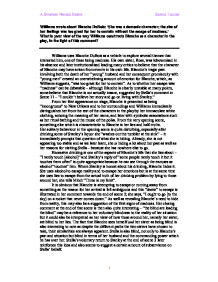 What is your view of the way Williams constructs Blanche as a character in the play, in the light of this comment?

Williams wrote about Blanche DuBois: 'She was a demonic character; the size of her feelings was too great for her to contain without the escape of madness.' What is your view of the way Williams constructs Blanche as a character in the play, in the light of this comment? Williams uses Blanche DuBois as a vehicle to explore several themes that interested him, one of these being madness. His own sister, Rose, was lobotomised in his absence and later institutionalised leading many critics to believe that the character of Blanche may have arisen from events in his own life. Blanche's tragic past involving both the death of her "young" husband and her consequent promiscuity with "young men" created an overwhelming amount of emotion for Blanche, which, as Williams suggests, "was too great for her to contain". As to whether her escape was "madness" can be debatable - although Blanche is clearly unstable at many points, some believe that Blanche is not actually insane, suggested by Stella's comment in Scene 11 - "I couldn't believe her story and go on living with Stanley." From her first appearance on stage, Blanche is presented as being "incongruous" to New Orleans and to her surroundings and Williams immediately distinguishes her from the rest of the characters in the play by her immaculate white clothing, echoing the meaning of her name, and later with symbolic associations such as her ritual bathing and the music of the polka. From the very opening scene, something else which is characteristic to Blanche is her lies and half-truths. ...read more.

to realise that she doesn't actually understand Stanley and at the same time does not understand the importance of the security that Stanley is offering Stella; though she does understand the importance of financial as well as emotional security clearly shown by her efforts to marry Mitch. Despite her lack of insight on Stanley, Blanche does raise some realistic issues on Stella's subservience to her husband - "you here - waiting for him!" which comes into play later on at the end of scene 11 when Stella makes her decision to believe Stanley over Blanche. So although Blanche's attempt at convincing Stella to leave Stanley is not completely selfish as it can also be a form of survival, and after all, one theme that Williams was clearly intending to convey is that of social Darwinism - only the strongest survive; and in this case, that would be Stanley as he is superior to Blanche in both physical and mental strength. This is clearly supported in his successful r**e of Blanche, achieving complete domination over her in the one way she does understand - through the s****l act of r****g her. The opening of scene 5 is particularly revealing of Blanche's metal state and interestingly enough, her attempt to escape reality is voluntary and as the play progresses her lying becomes almost pathological. Even he fact that she "laughs" at herself for "being such a liar" is important as it shows the way in which Blanche uses heavy irony to consequently trivialise the idea of lying which ultimately makes her feel better emotionally. ...read more.

Even the small detail of "slam[ming] the mirror face down" and causing the glass to "crack" reveals how Blanche cannot even stand to look at herself in the mirror as it symbolically represents facing herself, and sadly enough she seems to dislike herself and the person she has become. The cracking mirror can also be used to suggest a certain superstition connected to the breaking of mirrors which fits in appropriately with the consequent events which take place. Using madness to escape from feelings which are "too great...to contain" is strongly associated with Blanche but to some extent, I believe, with Stella. Although Stella decides to believe that Stanley is telling the truth and that Blanche is in actual fact "insane" is Stella's own way of avoiding the actual truth of the events of scene 10. This is also a form of escapism which suggests that ultimately, Stella will follow the same tragic past as that of her sister's; into mental 'death' following a newfound will to believe in lies. Williams uses Blanche to convey his themes as well as unleashing a certain amount of s****l frustration he was feeling. In the end, despite whether Blanche is really "mad" or not is still debatable but I don't believe she is; after all, it was quite clear from the end of scene 3 that her s****l "desire" for Stanley overrode her affection for her sister. It is then no wonder that Blanche has "always depended on the kindness of strangers." A Streetcar Named Desire Serene Touma 1 ...read more.