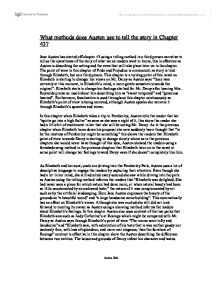 What methods does Austen use to tell the story in Pride and Prejudice Chapter 43?

What methods does Austen use to tell the story in Chapter 43? Jane Austen has started off chapter 43 using a telling method in a third person narrative to tell us the eyewitness of the story of what we as readers want to know, this is effective as Austen is describing the setting and the even that will take place later on in the chapter. The point of view in this chapter of Pride and Prejudice is omniscient; as story is told through Elizabeth, but as a third person. This chapter is a turning point of this novel as Elizabeth is starting to changer her views on Mr. Darcy as Austen says "there was certainly at this moment, in Elizabeth's mind, a more gentle sensation towards the original". Elizabeth starts to change her feelings she had for Mr. Darcy after hearing Mrs. Reynolds praise so much about him describing him as "sweet tempered" and "generous hearted". Furthermore, focalization is used throughout this chapter continuously as Elizabeth's point of view is being narrated; although Austen speaks she narrates it through Elizabeth's speeches and views. In this chapter when Elizabeth takes a trip to Pemberley, Austen tells the reader that her "spirits go into a high flutter" as soon as she sees a sight of it, this show the reader she had a little bit of excitement in her that she will be seeing Mr. ...read more.

The house and grounds of Darcy reflect his character and tastes. For a moment Elizabeth realises that she has some kind of regret that she rejected Darcy's proposal as she says "This was a lucky recollection - it had saved her from something like regret". Austen has yet presented the readers with another evidence that Elizabeth's views were changing toward Darcy. As Mrs. Reynolds describes Darcy's character to Elizabeth, she realises that is completely different from what she had seen as Mrs. Reynolds says "I do not know is good enough for his good temper". As soon as Mrs. Reynolds asks Elizabeth whether she thinks Darcy is handsome, she blushes and says "Yes, very handsome" Austen through showing method shows the readers that Elizabeth was blushing as soon as Mrs. Reynolds asked her a question about Darcy as she says "Elizabeth coloured" through third person narrative, this is effective because the readers get to see the overview of Elizabeth's feeling changing slowly. When Mrs. Reynolds describe Darcy as "sweet tempered" Elizabeth with shock questions herself saying "Can this be Mr. Darcy?" as se couldn't believe her ears, her firmest opinion of Mr. Darcy was quite the opposite one, and now she is only hearing good about him. ...read more.

When Darcy asks Elizabeth's permission to be introduced to his sister which is Miss Darcy, she feels honored as Austen through telling method informs the readers about this as she says "but she was flattered and pleased" she was so happy to hear such a complement from Mr. Darcy as it was of the highest kind. Elizabeth feels guilty for having prejudice towards Mr. Darcy however she doesn't say anything as she remains stays quite about that subject. Darcy has won her affection and Elizabeth has dropped her wrong views that she had also about him as Darcy spoke to her with "perfect civility" and with "civil enquiries", she feels astonished by Darcy's altered behaviour just for her. Pride and Prejudice is a novel in which Jane Austen has used several techniques concerning the sense of place to create a fine novel of mannerisms, misjudgments, and mayhem. Austen's choice of word moved Elizabeth's feelings towards Darcy in a way that whatever he did and said to her she admired it. Through a dialogue of Mrs. Reynolds and Elizabeth's aunt and uncle, Austen introduces Darcy's real characteristics to the readers. There is also use of archaic language in this chapter for example when Austen uses the term "adieu" and "vexation" to show the readers the time period it was set in as well as wanting us to see the aspect of life. ?? ?? ?? ?? Amina Bibi ...read more.