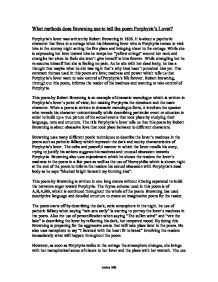 What methods does Browning use to tell the poem Porphyrias Lover?

What methods does Browning use to tell the poem Porphyria's Lover? Porphyria's lover was written by Robert Browning in 1836. It is about a psychotic character that lives in a cottage when his blooming lover who is Porphyria comes to visit him in the stormy night setting the fire place and bringing cheer to the cottage. While she is expressing her love toward him he wraps her "yellow strings" around her neck and strangles her since he feels she won't give herself to him forever. While strangling her he re-assures himself that she is feeling no pain. As he sits with her dead body, he has a thought that maybe what he did was right that's why God hasn't punished him yet. The common themes used in this poem are love; madness and power which tells us that Porphyria's lover want to take control of Porphyria's life forever. Robert browning, through out this poem, informs the reader of his madness and wanting to take control of Porphyria. This poem by Robert Browning is an example of dramatic monologue which is written in Porphyria's lover's point of view, but making Porphyria the dominant and the main character. When a poem is written in dramatic monologue form, it involves the speaker who reveals his character unintentionally while describing particular event or situation in order to build up a true picture of the actual events that took place by studying their language, tone and structure. ...read more.

outside marriage also showing the reader her seductiveness towards her lover by saying Porphyria was seductive, she "put my arm around her waist, made her smooth white shoulder bare" creating imagery in readers mind that Porphyria was beautiful, by adding five sense to the poem. There is also the use of repetition when the lover says "yellow hair" throughout the poem. Her "yellow hair" can be referred to her seductive, manipulation and also her weapon of death. Porphyria start to murmur how she loved him in flirtatious manner however her lover doesn't believe her as their love is insecure; there is also the use of onomatopoeia presented. Browning informs the reader that the narrative in this poem remains passive as Porphyria says "no voice replied" also the use of caesura, which represents his silence when he doesn't reply to his lover. Porphyria did not give her self to him fully as she was from different social class, she had pride, he believed she was too vain "she too weak for all her hearts endeavour, to set its struggling passion free from pride and vainer ties dissever and give herself to me forever" However she did come from her gay feast just to see him. "Nor could to-nights gay feast restrain" the language that Browning wrote this quote is in archaic language. ...read more.

The lover makes her sit up even though she is dead, and he puts his head on her shoulder this time to show his power toward her. Porphyria's lover also refers Porphyria by using irony and Synecdoche while saying "smiling little rosy head" to show the readers that she was happy where she was and how much he has power over her once she is dead. Browning also tells the readers Porphyria's lovers obsession towards her and expressing his happiness when using exclamation marks whilst saying "its love, am gain instead!" Lastly the poem finishes of by saying "and yet God has not said a word!" the lover thinks whatever he did was right; God will not punish him for his evil deed. This last line represent on of the key themes found in the poem which is of evil. Browning has also used anaphora in this last line to emphasize on the repetition of the word "And". This poem by Robert Browning shows how the lover wanted to take over Porphyria's life but couldn't as she was from upper class and had "pride". Browning in this poem has showed the readers how Victorian men wanted to have power over the females in society. Browning has excellent use of adjectives to make this poem effective as possible. The main themes that appear throughout the poem are of power, obsession and death. ?? ?? ?? ?? Amina Bibi ...read more.