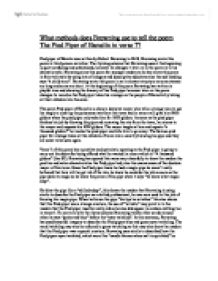 What methods does Browning use to tell the poem The Pied Piper of Hamelin in verse 7? Pied piper of Hamlin was written by Robert Browning in 1849. Browning wrote this poem in third person narrative. The rhyming scheme that Browning uses at the beginning is quiet confusing and unbalanced, however he changes it later on in the poem in to his dramatic style. Browning aims this poem for younger readers as he has wrote this poem in fairy tale style by using lots of imagery and descriptive adjectives also the sub heading says "a child story". Browning wrote this poem in an irrelevant structure as some stanzas are long and some are short. At the beginning of this poem Browning has written in playful tone and showing the bravery of the Pied piper however later on the poem changes its mood as the Pied piper takes his revenge on the people of Hamelin by taking all their children into the cave. The poem Pied piper of Hamelin is about a decisive mayor who tells a strange man to use his magic to clear up the poisonous rats from this town and in return will give him 5000 gliders when the pied piper only asks him for 1000 gliders. ...read more.

Browning uses simile to described how the Pied pipers eyes twinkled, which were like "candle flames where salt is sprinkled" he also carryings on with the rhyming scheme to tie together this three verses to create suspense. The uses of beautiful imagery and the use of rhyme scheme may suggest to the readers that this poem by Browning is set out for children. Further more, when he says "the pipe uttered" the use of personification saying that the pipe was talking is also a sign of children's poetry. Browning has used personification to convey and emphasize unusual and vivid images of this magic pipe that Pied piper was using to get rid of rats in this town. Browning informs the reader that the sound of the pipe was like "an army muttered" the use of simile shows the readers that the sound of pipe was loud, noisy and wasn't very pleasant. The use of army may indicate to the reader that this was probably the reason why all the rats had to follow the sound of the pipe after the Pied piper has blown it, like how an army has to follow its leader. Browning in this poem used the magic pipe as a symbol of power. ...read more.

The rat that saved himself carries on telling his tale and how all the rats were deceived by the sound of food whereas the magic pipe was leading them to the river. The rats says that the voice was coming from musical instrument such as "harp or psaltery" telling us that to "rejoice" and how they were all tricked in to it even him until he found himself in the river. Browning has written the rat's point of view in first person narrative as he uses "I" to tell his story. He has used this technique to inform the rat's point of view to make it more dramatic for the reader as to what had happen to them. The common theme that Browning has used in verse seven are of deceiving one another. The Pied piper is going to be deceived by the mayor of this town whereas the Pied piper has tricked the rats into the river but for good cause. Browning has used beautiful adjectives for description and also the use of onomatopoeia to describe the voice of the magic pipe. These techniques are often found in children's poetry. Browning has also written this poem for children to inform them that everything bad must be destroyed; in this verse the rats are destroyed. ...read more.