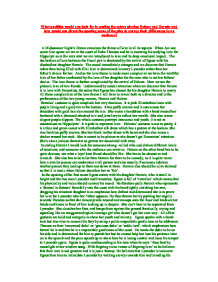 What qualities would you look for in casting the actors playing Helena and Hermia and how would you direct the opening scene of the play to convey their differences to an audience? A Midsummer Night's Dream examines

What qualities would you look for in casting the actors playing Helena and Hermia and how would you direct the opening scene of the play to convey their differences to an audience? A Midsummer Night's Dream examines the theme of love in all its aspects. When Act one scene One opens we are at the court of Duke Theseus and he is swearing his undying love for Hippolyta so at the very start we are introduced to love and its deep emotional impact. The declaration of love between the Ducal pair is shortened by the arrival of Egeus with his disobedient daughter Hermia. The mood immediately changes and we discover that Hermia rather than being filled with filial love is determined to marry Lysander rather than her father's choice for her. And so the love theme is made more complex as we have the wrathful love of her father confronted by the love of her daughter for the man who is not her fathers' choice. The love theme is further complicated by the arrival of Helena. Here we see the platonic love of two friends. Undermined by s****l attraction when we discover that Helena is in love with Demetrius, the suitor that Egeus has chosen for his daughter Hermia to marry. All these complexities of the love theme I will have to reveal both as a director and in the performance of the two young women, Hermia and Helena. Hermias' costume is quite simplistic but very feminine. It is pink Elizabethan linen with purple lining and a gold rim at the bottom. It has puffy sleeves and it cuts across her shoulders with gold lace also around the rim. She wears a headdress with a band around her forehead with a diamond attached to it and jewellery to reflect her wealth. She also wears elegant purple slippers. The whole costume portrays innocence and youth, it is not as ostentatious as Hippolytas'. ...read more.

Theseus describes how living the life as a nun involves 'chanting faint hymns to the cold fruitless moon' he exaggerates how miserable and gloomy her life would be. His voice should be quite deep with a harsh, gruesome tone as he uses brutal words such as 'blood,' 'withering' and 'thorn' which are all associated with blood, dying and pain. He uses the metaphor 'rose distilled', which he uses to show how marriage releases the essence of the maiden's swiftly passing beauty and she would not have that if she lives a life of celibacy. He points out that she will remain a virgin and will live a very forlorn life ' Grows, lives, and dies in single blessedness' and he hopes that this powerful line will change her mind but being the defiant, stubborn, wilful woman that she hold her head up high and accepts the punishment. She surprisingly wants to keep her virginity as she does not want her soul to give 'sovereignty.' She does not want her father to dominate her and take control of her and doesn't want to die because of him. This shows that audience that she is maybe sceptical towards men and has the ability to live on her own until the day she dies. She is still kneeling to show that she is weak and lower status even though she is a strong character. Egeus refuses to listen to Lysander and still loves Demetrius so he leaves with Demetrius, Theseus and Hippolyta to discuss the situation and better prepare for Theseus's wedding. With the two of them gone, Hermia and Lysander lament their situation. There is a decisive mood change here, as Hermia is not left alone with her would-be lover. When they leave, Hermia is still kneeling on the floor, helpless and hurt, but she still maintains her love for Lysander, she then gets up and runs across the stage elegantly on the b***s of her feet, taking little steps to her lover whose arms are open. ...read more.

She also looks around to make sure no one is listening and at the end she laughs hysterically which turns into a cackle and the audience find this quite funny. She doesn't expect to be thanked because Demetrius will begrudge doing so. She runs off quite pleased with herself and smiling. Hermia's best friend has decided to denounce her to her betrothed As the director of this play I try to portray the differences between Hermia and Helena in the opening scene. Hermia is the liveliest, the boldest and the most intelligent. She has clear-cut views on life, love, and marriage. She is brave enough to oppose her father's choice of her husband and refuses to marry Demetrius, even though Egeus threatens to have her punished if she does not obey. Hermia knows what she wants in marriage and has chosen to make Lysander her husband. In the court of Theseus, she boldly argues with the Duke and defends her love for Lysander, stating that he is a most worthy man. When she finds that her pleas are falling on deaf ears, she wants to know "the worst that may befall me in this case If I refuse to wed Demetrius." When the Duke pronounces that Athenian law calls for the death sentence, Hermia bravely decides to die rather than yield to man whom she does not love. When Lysander suggests that the two of them run away and get married, she does not hesitate to accept his offer. In the first scene of the play, we are also introduced to Helena's problem, which is that she desperately loves Demetrius, but he is in love with her friend Hermia. Both Lysander and Helena herself reveal that Demetrius was at one time involved with Helena. Lysander tells Theseus that Demetrius "Made love to ... Helena, And won her soul." Helena says that before Demetrius looked upon Hermia, "He hail'd down oaths that he was only mine." In an attempt to win back some of Demetrius's affection, Helena tells him of Hermia's plan to meet in the wood and elope with Lysander. ...read more.