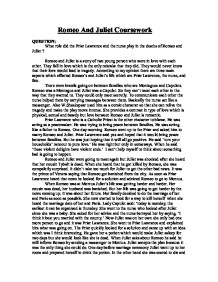 What role did the Friar Lawrence and the nurse play in the deaths of Romeo and Juliet ?

Romeo And Juliet Coursework QUESTION; What role did the Friar Lawrence and the nurse play in the deaths of Romeo and Juliet ? Romeo and Juliet is a story of two young person who were in love with each other. They fall in love which is the only mistake that they did. They would never know that their love would lead to tragedy. According to my opinion there are three main aspects which effected Romeo's and Juliet's life which are Friar Lawrence, the nurse, and fate. There were brawls going on between families who are Montagues and Capulets. Romeo was a Montague and Juliet was a Capulet. So they can't meet each other in the way that they wanted to. They could only meet secretly. To communicate each other the nurse helped them by carrying messages between them. Basically the nurse act like a messenger. Also W.Sheakspear used him as a comic character so that she can relive the tragedy and make the play move intense. ...read more.

She now started to look for a way to kill herself when she heard the marriage date of her and Paris. Lady Capulet said: 'today is monday, the earliest it can be organised is thursday. She went to the nurse who looked after Juliet since she was a baby. She asked for her advice and the nurse betrayed her by saying, 'I think it best you married with the county.' Now Juliet was on her own she only had one more person to go and it was Friar Lawrance. She went to Friar Lawrance and explained him what was going on. The Friar quickly looked for a solution and came up with an idea which was I think interesting. He gave her a potion which would make Juliet asleep for two days but she would look like she is dead. When Juliet asks about Romeo he said he will inform Romeo by sending a messenger to Montua. Juliet accepts the plan because it was the only thing she could do. ...read more.

There are some examples of fate in the play as follows; If the messenger delivered the message to Romeo he would know that Juliet is still alive so he wouldn't kill himself. Another example is when the Friar reports to the prince that he did what he can to get Juliet out of the vault and saying, 'bear his work of heaven with patience.' When the prince says 'heaven finds means to kill your Joys with love.' Capulet and Montague shake hands and promise that there won't be any other fight between the families. This was what the Friar wanted to see and hear but it cost a bit much which is two young persons life. There were dramatic moments which make the audience to feel like they are getting involved. Example for this is when the nurse says 'marry Paris' to Juliet when she knew that Juliet was already married to Romeo. At that time light blue lighting on actress who acts the character Juliet would make her look like frozen and shocked. At the end Friar Lawrance did what he wanted to do. He brought peace between families but two young lovers paid it by their lifes. ALEX GUVENEL ...read more.