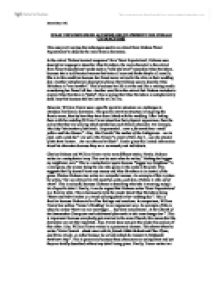 What Techniques Do Authors Use To Present the Female Characters? using extracts from Great Expectations

WHAT TECHNIQUES DO AUTHORS USE TO PRESENT THE FEMALE CHARACTERS? This essay will analyse the techniques used in an extract from Dickens 'Great Expectations' to describe the main female characters. In the extract 'Broken hearted vengeance' from 'Great Expectations', Dickens uses descriptive language to describe Miss Havisham, the main character in the extract from 'Great Expectations' words such as "cold and cruel" resembles Miss Havisham, because she is cold-hearted woman that hates all men and thinks they're all canaille. She is in this condition because her fianc� never arrived to the altar on their wedding day. Another metaphorical descriptive phrase that Dickens uses to describe Miss Havisham is "wax candles". This is because her life is at the end like a melting candle considering her fianc� left her. Another word from the extract that Dickens includes to explain Miss Havsham is "faded", this is saying that Miss Havisham is metaphorically dead I say this because she has lost the will to live. However, William Trevor uses a specific narrative structure as a technique to introduce his female characters. The specific narrative structure is by giving the female name, then by how they have been linked with the wedding. After linking them with the wedding William Trevor describes their physical appearance, then the colour that they are wearing which symbolises each female character. ...read more.

This is panoramic because these characters are unimportant and yet they are briefly described without any detail being given. Finally, Trevor writes in a realistic style. His story is realistic because he includes details such as "In no way did Teresa love him". 'Teresa's Wedding' has no feeling for the groom. This still occurs in society today and so represents many marriages of the Twentieth Century. Another technique that both authors employ is using the environment to represent the female characters. For example, Dickens states that Miss Havisham is careless "for she had one shoe on". This represents Miss Havisham because it symbolizes that there is a man missing from her life, her life is not complete. Also, like the clock Miss Havisham has "stopped". This links to Miss Havisham because she is metaphorically 'dead' because her life is at an end due to her fianc� not turning up at the altar. Similarly, William Trevor also uses the negative setting of the lounge bar to symbolise the relationship between Teresa and Artie. For example, the linoleum on the floor is "tattered". This links to Teresa because her life is ruined and she doesn't want to get married. Another example of this is "there was nothing special" because the town is dull and boring, and there is nothing important about it or the wedding. ...read more.

For example, just before writing 'Great Expectations', Dickens had ended an affair with an actress. This meant that he was not happy with women in general and this can be seen in his novel. There is a correlation between Miss Havisham and Dickens' ex. This meant that Miss Havisham is a bitter, harsh, cruel and resentful woman. Rather then speaking politely to Pip she says, "Play" in a rude manner. Similarly, the way that Trevor felt at the time of him writing 'Teresa's Wedding' also had an effect on the way that he portrayed his female characters. William Trevor had sympathy for people who were marginalized within society. This can be seen through the character of Loretta, because she "had married a man who was no longer mentioned because he'd gone to England and had never come back". This means that she was jilted, but unlike Miss Havisham Loretta has moved on with her life. To conclude, both authors use a variety of literary techniques when creating their female characters. For example they were both influenced by the social, cultural and historical events that were happening. Also each author has been influenced by their feelings they had or the events in their lives at the time of writing their characters. As well, they both used specific writing styles and they also used the environment to express their female characters. However, Dickens also uses descriptive language whereas Trevor uses a specific narrative structure. Murat Ilhan 10C ...read more.