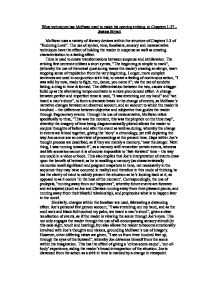 What techniques has McEwan used to make his opening striking in &quot;Enduring Love&quot;?

What techniques has McEwan used to make his opening striking, in Chapters 1-3? - Jessica Bryant McEwan uses a variety of literary devices within the structure of Chapters 1-3 of "Enduring Love". The use of syntax, time, focalisers, sensory and metanarrative techniques have the effect of holding the reader in suspense as well as creating characterisation to a lasting effect. Time is used to create transformations between suspense and exhilaration. The striking first sentence utilizes a short syntax, "The beginning is simple to mark", (whereby the use of rhetorical questioning teases the reader) creating an abrupt, heart-stopping sense of trepidation from the very beginning. Longer, more complex sentences are used in conjunction with this, to create a feeling of continuous action, "I was wild by now, ready to fight, run, dance, you name it"; via the use of syndetic listing, a drag in time is formed. The differentiation between the two, causes a bigger build up as the alternating tempo contrasts to a more pronounced effect. A change between perfect and imperfect tense is used, "I was stretching out my hand" and "we heard a man's shout", to form a dramatic break in the change of events, as McEwan's narrative changes between an observed account, and an account to which the reader is involved - the difference between objective and subjective that guides the reader through fragmentary events. ...read more.

This not only engages the reader through the use of all-encompassing sensory stimuli (in this case sight, touch and hearing), but also allows the reader to become emotionally involved with Joe's thoughts and visions, grounding McEwan's use of imagery. However, other differing views are given, "I see us from three hundred feet up, through the eyes of the buzzard", whereby Joe distances himself from the scene within his imagination. This has the effect of giving a 'crime-scene-esque', 'out-of-body' experience, aiding the reader's broad introspection of the situation. Joe is distanced from the action as a shift in time is marked by a change in viewpoint. Likewise, Joe and Jed are described from the buzzard's point of view as "like lovers, innocent of the grief this entanglement would bring"; this is ironically propleptic of the rest of the novel, as Jed will believe they are lovers, yet it is Joe who will feel "grief" - further evidence that it is Joe's opinions and thoughts we are hearing. The irony is represented by the buzzard's point of view being embedded in Joe's first person narrative. The reader is kept in suspense throughout via McEwan's use of ambiguity in order to build tension. ...read more.

Joe is portrayed as not being in touch with his emotions in the same way as Clarissa is - whilst she finds the romance of Keats exciting, emotional and attractive declaration of love, Joe interprets his letters as unnecessary in a condition of 'love already won'. This suggests a dire incompatibility. On the contrary, Joe uses the scientific analogy, as describing their relationship as being an "equilibrium", showing the way in which Joe deals in measurable, quantifiable facts. This need for solidity, sense and repeatability creates a void within his understanding of emotions which cannot be put into formulaic form. Overall, whilst McEwan's use of syntax, time, focalisers, sensory and metanarrative techniques are used effectively, and bring excitement to the novel, it is his use of imagery that truly grips and insights thought within the reader. For example, the use of the metanarrative metaphor, "a kind of furnace in whose heat identities and fate would buckle into new shapes", that describes the creative process by putting the author in the position of a blacksmith forging and shaping characters from metal, and creating a sub-context within the novel, enables McEwan to create a story that does not follow the linear predictability of other novels. ...read more.