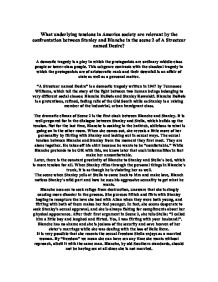 What underlying tensions in America society are relevant by the confrontation between Stanley and Blanche in the scene 2 of A Streetcar named Desire?

What underlying tensions in America society are relevant by the confrontation between Stanley and Blanche in the scene 2 of A Streetcar named Desire? A domestic tragedy is a play in which the protagonists are ordinary middle-class people or lower-class people. This subgenre contrasts with the classical tragedy in which the protagonists are of aristocratic rank and their downfall is an affair of state as well as a personal matter. "A Streetcar named Desire" is a domestic tragedy written in 1947 by Tennessee Williams, which tell the story of the fight between two human beings belonging to very different social classes: Blanche DuBois and Stanley Kowalski. Blanche DoBois is a pretentious, refined, fading relic of the Old South while as Stanley is a raising member of the industrial, urban immigrant class. The dramatic climax of Scene 2 is the first clash between Blanche and Stanley. It is well prepared for in the dialogue between Stanley and Stella, which builds up the tension. Not for the last time, Blanche is soaking in the bathtub, oblivious to what is going on in the other room. When she comes out, she reveals a little more of her personality by flirting with Stanley and lashing out in s****l ways. ...read more.

When Stanley was a stranger, she desired him or at least flirted with him. Nevertheless, Stanley was never able to understand the sensitivity behind Blanche's pretense. Even when Stella refers to Blanche as delicate, Stanley cries out in disbelief: "Some delicate piece she is." It is, then, Stanley has forced brutality that causes Blanche to crack up. The r**e is Blanche's destruction as an individual. In all previous s****l encounters, Blanche had freely given of herself. However, to be taken so cruelly and so brutally by a man who represents all qualities which Blanche found obnoxious caused her entire world to collapse and went deeper into her own world, detachment from reality and her decision to see life only as she wishes to perceive it. "Whoever you are-I have always depended on the kindness of strangers." The scene of when Stanley demands to see the papers about the loss of Belle Reve highlights a difference between himself and Blanche as well as their similarity. He thinks that by demanding the papers, he would force Blanche to admit wrongdoing, but she turned over the papers without a fight and now he has to figure out what to do with them. ...read more.

They meet one another in the socially turbulent post-war period in New Orleans, one of America's most diverse cities. Each represents values that are antagonistic to the other's chance at success in the modern world. Williams advocates a moderate approach to the indulgence of desires. Desire is a fact of life and a driving force in the lives of Williams' characters. Though Stanley, a r****t and wife beater, is no one's prototype for the perfect man, Blanche's denial of her desire, which leads her to hit on young boys, is equally dangerous. A tension between a romantic and a realistic world-view is present throughout the entire play, embodied in the contrast between Stanley and Blanche. Clearly, Blanche is the romantic - where she sees "the ghoul-haunted woodland of Weir," Stella sees simply the L&N tracks - and Stanley "no wool over this boy's eyes" Kowalski is the realist. But Williams isn't setting up a simple dichotomy, because neither Blanche nor Stanley is exactly what they think they are. Blanche's romantic worldview is as much a desire as anything else - she has seen the truth, and she choose to ignore it. "The Kowalskis and the DuBois have different notions" "Indeed they have, thank heavens! " ...read more.