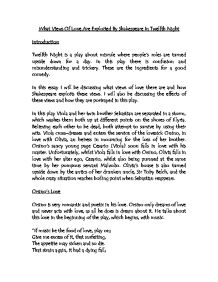 What Views Of Love Are Exploited By Shakespeare In Twelfth Night

What Views Of Love Are Exploited By Shakespeare In Twelfth Night Introduction Twelfth Night is a play about misrule where people's roles are turned upside down for a day. In this play there is confusion and misunderstanding and trickery. These are the ingredients for a good comedy. In this essay I will be discussing what views of love there are and how Shakespeare exploits these views. I will also be discussing the effects of these views and how they are portrayed in this play. In this play Viola and her twin brother Sebastian are separated in a storm, which washes them both up at different points on the shores of Illyria. Believing each other to be dead, both attempt to survive by using their wits. Viola cross-dresses and enters the service of the lovesick Orsino, in love with Olivia, an heiress in mourning for the loss of her brother. ...read more.

Orsino is a true believer of love and feels if you love someone so much you will eventually win that person over no matter what the circumstances which in this case is Olivia mourning for her brother. Here is another quote between Curio and Orsino: Curio: Will you go hunt, my lord? Orsino: What, Curio? Curio: The hart Orsino: Why so I do, the noblest that I have. O when mine eyes did see Olivia first... Whenever Orsino is being talked to all of his replies are mainly based around Olivia and how much he loves her. He immediately talks about Olivia in this extract when being talked to by Curio. He shows hyperbole in his conversations, which is shown by his lavish descriptions. Olivia's Love Olivia is mourning for her brother and she says she will not be in the company of men for 7 years. The stylish Cesario, who takes her away with his good looks, even though Cesario is Viola in disguise, dazzles her. ...read more.

Viola does not let the fear of her brother's death interfere with her life like Olivia does, but she just lives in hope and carries on with life. She also has sibling love for her brother because when she talks to the captain about her brother's life she keeps persisting in asking the captain to say what she really wants to hear. She is also very hopeful in finding her brother and getting Orsino to love her. Her sibling love is shown in Act 1 Scene 2. She is also very secretive. Her cover disguising herself as a man and adventuring in a place that she hasn't heard of portrays this. Conclusion Love plays a major role in "Twelfth Night," and Shakespeare addresses true love, self-love and friendship in a very compelling and interesting way. There are many people in the film who portray several forms of love and from their actions you are able to depict what type of love it is. The person who has the most love or at least the most unbelievable love has to be, of course, Malvolio with his self-absorbed nature. ...read more.