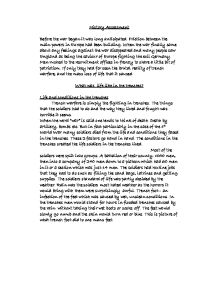 History Assessment Before the war began it was long anticipated. Friction between the main powers in Europe had been building. When the war finally came about any feelings against the war disappeared and many people saw England as being the saviour of Europe fighting the evil Germany. Men rushed to the recruitment offices in frenzy to share a little bit of patriotism. If only they had for seen the brutal reality of trench warfare, and the mass loss of life that it caused. What was life like in the trenches? Life and conditions in the trenches Trench warfare is simply the fighting in trenches. The things that the soldiers had to do and the way they lived and fought was horrible it seems. When the word "war" is said one tends to think of death. Death by artillery, bombs etc. But in fact particularly in the case of the 1st World War many soldiers died from the life and conditions they faced in the trenches. These 2 factors go hand in hand. The conditions in the trenches created the life soldiers in the trenches lived. Most of the soldiers were split into groups. A battalion of their county- 1000 men, then into a company of 240 men down to a platoon which had 60 men in it or a section which was just 14 men. The soldiers had routine jobs that they had to do such as filling the sand bags, latrines and getting supplies. ...read more.

Although only a small percentage of people actually died because of the conditions in the trenches many subsequently suffered from shell shock. Shell shock was first noticed in 1914. It caused the men to eventually suffer a mental breakdown and would effect them for life. Although one group of doctors argued that it was cause by enemy artillery and the vacuum that came after it but many put it down to the horrors of trench warfare. Dangers There were many dangers in the trenches that soldiers had to be careful of. Trench foot was one of them. Obviously caused by the conditions in the trenches was a life threatening factor a sure danger. Like trench foot infection was a big danger caused by the conditions in the trenches. It could turn minor injuries into life threatening wounds. One of the biggest threats and dangers in the 1st World War however was a gas attack. The first gas attack was launched on the 22nd April 1915 by the Germans against the French. Chlorine gas destroys the respiratory system of the men unfortunate enough to have inhaled it. Other gases used were phosgene which killed the victim in 48 hours, mustard gas, the most lethal gas used in the war which is almost odourless and took twelve hours to take effect, bromine and chloropicrin. Poison Gas Deaths: 1914-1918 Country Non-Fatal Deaths Total British Empire 180,597 8,109 188,706 France 182,000 8,000 190,000 United States 71,345 1,462 72,807 Italy 55,373 4,627 60,000 Russia 419,340 56,000 475,340 Germany 191,000 9,000 200,000 Austria-Hungary 97,000 3,000 100,000 Others 9,000 1,000 ...read more.

'The soldiers at the front need more rest. While in the trenches the water is over our knees most of the time. The war is going to last some time yet, and might be another twelve months before it is over. The war has only just begun and its going to be a war of exhaustion. After the regular armies have done their work it means that all the young lads at home being trained and disciplined and will take our place in the field. The sooner people understand this, the better, it will be for the nation.' Conclusion The first world war was an extremely bloody one with millions loosed to a few countries petty arguments. The great loss of life was caused by many things. Life and conditions in the trenches caused some deaths but not as much other factors. Although it distressed many people. Obviously the dangers in the trenches must of killed quite a few people as they were the main killing factors. Mostly, though I think it was the attacks that caused such a high loss of life as with every attack hundreds even thousands were loosed to the deadly machine guns. This conclusion though really depends on how you look at the essay. You could argue that the main dangers were attacks, that the machine guns were part of life in the trenches and that the sheer fact that the trench system was in action making attacks happen that makes everything come to one final point. All of the sections are linked as they all relate closely to each other. Personally it was all these factors that collectively created the huge number of deaths. ...read more.