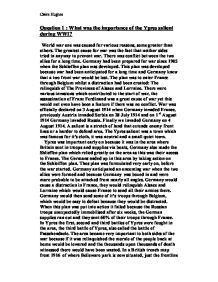 what was the importance of the Ypres salient during ww1

Question 1 : What was the importance of the Ypres salient during WWI? World war one was caused for various reasons, some greater than others. The greatest cause for war was the fact that neither sides tried in anyway to prevent war. There was conflict between the two allies for a long time. Germany had been prepared for war since 1905 when the Schlieffen plan was developed. This plan was developed because war had been anticipated for a long time and Germany knew that a two front war would be lost. The plan was to enter France through Belgium whilst a distraction had been created: The relinquish of The Provinces of Alsace and Lorraine. There were various invasions which contributed to the start of war, the assassination of Franz Ferdinand was a great cause of war yet this would not even have been a feature if there was no conflict. War was officially declared on 3 August 1914 when Germany invaded France, previously Austria invaded Serbia on 28 July 1914 and on 1st August 1914 Germany invaded Russia. ...read more.

There were great struggles, hardships and pains faced and endured in the war. In the trenches the worst conditions occurred. Some of the problems faced ere lice. Men would not wash for months, live in close quarters with fellow comrades; they would rarely change clothes, and rat and human phases would spread. A man would be covered in lice, constantly itching. Rats were attracted to the raw human flesh, dead bodies lying around would be eaten by rats. Along with rats comes disease, which would easily be spread with the amount of men living closely. Men in the trenched would stand in waist high mud due to the lack of successful drainage systems life within the trenched were extremely boring and mundane, hardly and attacks waiting. Trenchfoot would cause the foot rot and eventually fall off with days of it being immersed in mud. The boots and equipment worn were extremely heavy which gave the soldiers sore feet and made them tired. The rations given were unsuitable and miniscule, the diet of a soldier would involve bread so stale it was barely digestible, bullied beef and biscuits, this was hardly appropriate for a man fighting in a world wide war. ...read more.

This is disrespectful, there are large black plaques with thousands of soldier's names on them, instead of large white individual graves, and only a small number of soldiers had small black flat graves on the floor. The way that the German graves are presented represents the respect that Belgium regards they deserve, to see the graves you must look downwards which symbolises Belgium's respect towards them. They are as hidden as possible. They are on the floor as if in hell and the few trees are bare and tall, this creates a sense of loneliness. The statues of German soldiers display destitute figures without any detail. The British cemeteries are magnificent; innocence is the main theme of the design. There is a large cross in the middle. On some graves is written "known unto god", these were the unidentified bodies. It is ironic that both sides of the war were fighting a holy war, both for the same reasons. Ypres is a memorial because so many men meaninglessly died there. The importance of The Ypres Salient during ww1 was the amount of events that were held there. So many men died and endured barely liveable conditions forendless months or years which represents the futility of war. Claire Hughes ...read more.