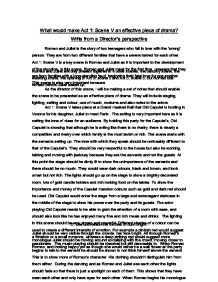 What would make Act 1: Scene V an effective piece of drama?

What would make Act 1: Scene V an effective piece of drama? Write from a Director's perspective Romeo and Juliet is the story of two teenagers who fall in love with the 'wrong' person. They are from two different families that have a severe hatred for each other. Act 1: Scene V is a key scene in Romeo and Juliet as it is important to the development of the storyline. In this scene, Romeo and Juliet meet for the first time, unaware that they are from families with a long-standing feud, beginning their fatal love for one another. This scene is also very important because Romeo and Juliet are only present together in 4 other scenes, the balcony scene, the wedding scene, the opening of Act 3, scene 5 and Act 5, scene 3, but Romeo kills himself before Juliet wakes up. As the director of this scene, I will be making a set of notes that should enable the scene to be presented as an effective piece of drama. They will include staging, lighting, setting and colour, use of music, costume and also notes to the actors. Act 1: Scene V takes place at a Grand masked Ball that Old Capulet is holding in Verona for his daughter, Juliet to meet Paris. The setting is very important here as it is setting the tone of class for an audience. ...read more.

This shows that they have seen each other and only have eyes for each other. When Romeo begins his monologue his voice needs to be filled with aw and wonderment. On the line, "O, she doth teach the torches to burn bright!" Juliet should be very visible through the crowds, her face bright. All through Romeo's monologue Juliet should be moving around socialising with the crowd, moving closer to Romeo, and looking happy yet as though she would rather be a wall flower at the party instead of the 'star attraction'. During this Juliet should keep looking at Romeo, as though she could hear what he was saying about her. Tybalt's hatred for anything Montague should be obvious as his voice cuts into Romeo's. Tyblat should be dressed in dark reds and blacks with gold jewellery to show power and anger. When Tybalt says, "To strike him dead I hold it not a sin" He should be very angry, and serious at the thought of killing Romeo. The argument between himself and Capulet should be forced and in hushed tones, as Capulet does not want his guests to see him arguing, "Well said, my hearts!" Here he should be putting on a fake smile to show his staff that nothing is wrong. When Romeo and Juliet are talking to each other the lights should go down on all other parts of the stage leaving Romeo and Juliet to talk in private. ...read more.

This suggests that Juliet already has a suspicion that her and Romeo will not be allowed to be together. The nurse tells Juliet, "His name is Romeo, and a Montague; The only son of your great enemy." Twice in the one sentence does the nurse try to put Juliet off. First by telling her he's a Montague, and then by making her feel guilty by calling him 'her' great enemy. Juliet's response to this is something she says to herself to remind herself of the predicament she is in, "My only love sprung from my only hate! Too early seen unknown, and known too late! Prodigious birth of love it is to me, That I must love a loathed enemy" This speech is full of despair; Juliet is upset that she should be the chosen one to fall in love with Romeo. The nurse hears Juliet's speech but Juliet dismisses it as a rhyme she learnt off one of the guests. As Juliet and the nurse exit the stage the lights need to go down. In staging Romeo and Juliet, by William Shakespeare, I think lighting and colours are the most important factor. Romeo and Juliet don't speak to each other that much therefore emotions need to be expressed across a stage. The importance of this scene needs to be evident; the scene sets the foundations for their love and for Tybalt's anger at being humiliated by Old Capulet to want to get even with Romeo, an act which almost kills him. ...read more.